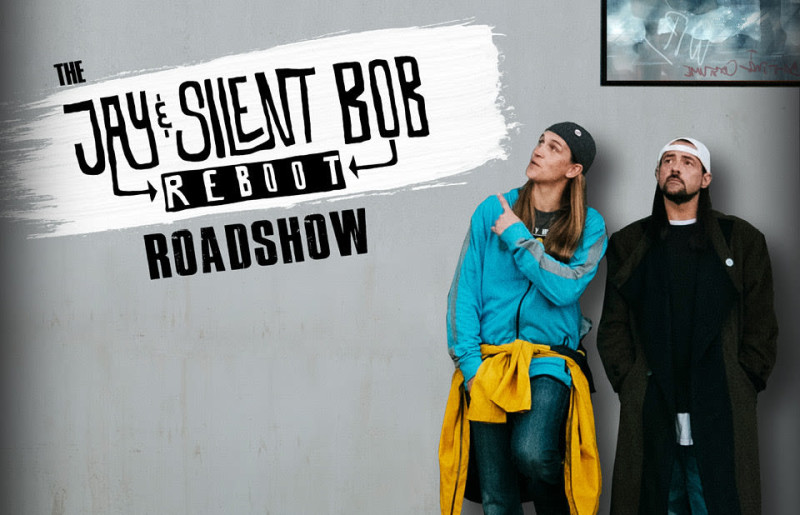 I was not sure what to expect going into the #RebootRoadshow to see “Jay and Silent Bob: Reboot“. The show opens with director and star of the movie, Kevin Smith, coming onto the stage and introducing the movie. He explains the joy he gets from seeing his fans react to each cameo and how fun it was to make the movie. I counted 44 cameos in total including one by Kevin Smith as himself, but may have missed a few of them here and there. I can say that every time there was a cameo the theater erupted in applause. He also informed everyone that he watches the movie at every roadshow viewing and after 89 showings he is still not bored of it. As a fan of Kevin Smith I have seen all of his movies from Clerks to Yoga Hosers and can admit there have definitely been some misses. I can say however if you enjoy his work you will most likely enjoy Reboot.

The movie opens up at our favorite place in the #ViewAskewUniverse, The Quick Stop. Next door where the rental place used to be is now a restaraunt name Co** Smokers, which we soon learn is owned by the titular characters Jay and his hetero life mate Silent Bob. You will then get a sense of Deja Vu if you have seen “Jay and Silent Bob Strike Back”. The boys accidentally sell their names to Saban Films who are Rebooting a Bluntman and Chronic franchise. They decide they need to stop this movie from getting made so they can regain control of their names. And so begins their journey to Chronic Con where they can talk to the films creators.

As the story unfolds the duo discovers that Jay has a daughter (played by Smith’s actual daughter, Harley Smith) named Millenium “Millie” Falconn that he was never told about. She, through threat of violence, convinces the duo to bring her and her friends to Chronic Con. While the first half of the movie is extremely meta in its recalls of previous films and many explanations of how a reboot differs from a remake. It has the levity that Jay and Silent Bob movies tend to have where it has no issue making fun of itself. Yet once we meet Jay’s daughter we see the movie develop into something more. It becomes a man trying to connect with the daughter he never knew he had and come to terms with what being a dad actually means.

The film starts to pull on your heartstrings as we learn the effects that not having a father had on Millie and see Jay fearing that he is not good enough to be someones dad. The real turning point comes after their arrival at Chronic Con where none other than #BenAffleck has a heart to heart with Jay about how your life changes when you become a father. With his new found knowledge of what being a parent means Jay decides that he must put what his daughter wants before his own. He decides to let this movie be made and help his daughter get her and her friends into the movie.

The movie then takes an odd turn involving a Russian spy trying to murder the actual Kevin Smith. As there was no preface to this it comes out of nowhere and feels out of place with the rest of the movie. It does however queue up an action sequence and a great delivery of a fan favorite line by Jason Mewes.

The movie ends with a beautiful father daughter moment between Jay and Millie. Jason Mewes successfully takes us to a place with the character that we have have never seen before. You will find yourself caring for the character in a way I did not think possible. Harley Smith showed us that she is not just Kevin Smith’s daughter that he puts in movies but a capable actress that I believe we will be seeing more of in the future.

When the credits roll we are given some additional scenes that did not make the final cut of the film. Kevin Smith then returns to the stage for the Q&A portion of the roadshow and in perfect Kevin Smith fashion he spends about 15-20 minutes answering each question.

The roadshow was a great experience and I suggest if you are a fan and in the area for one of the last dates you snag yourself some tickets. As a stand alone film once you get past the weed and sex jokes you have yourself a story about how being a parent effects your life.

Jay and Silent Bob: Reboot stars Jason Mewes and Kevin Smith, is directed by Kevin Smith, and is now available on DVD.