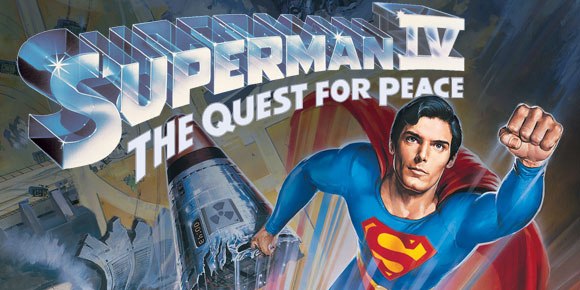 Let me start by saying this is technically one of the worst movies I have ever seen in my life. This movie is full of so many technical errors and plot screw ups it’s baffling it was even made. Before I talk about the movie, I wanna talk about the studio behind it. This movie was produced by Cannon Films, a studio notorious for making terrible movies. Their business strategy was to make films for dirt cheap so they didn’t need large box office gross to turn a profit. They produced really bad movies like Masters Of The Universe, Over The Top, and The Last American Virgin. Eventually their strategy stopped working and they went bankrupt in 1994. I want you to keep in mind that they thought this movie would be their golden ticket out of bankruptcy. It obviously didn’t work out for them.

Did I like anything about this movie? Christopher Reeve is perfect as Superman as always. That’s really it, Can’t really say anything good about it.

This movie’s plot is completely nonsensical. After a useless Space rescue, The film jumps to Superman making his baby ship disappear with his vision. Yes he just looks at the ship and it just vanishes in thin air. After that the plot goes from zero to sixty as a kid writes to Superman to get rid of all the world’s nukes. For some reason he goes along with this and rounds up all the nukes in the world in a giant net and throws them into the sun.

From this, the escaped Lex Luthor uses a strand of Superman’s hair to clone Superman. From the son comes a fetus which grows into Nuclear Man(Costume included). His weakness is immediately revealed to be he needs direct sunlight at all times to function. Meanwhile Someone trying to buy the Daily Planet has a daughter who is into Clark Kent and it creates a boring love triangle. In a battle with Nuclear Man, Superman is scratched and suddenly begins withering away. This is done away with almost immediately when he uses the green crystal from the first movie to heal.

Nuclear Man kidnaps the girl from the love triangle and takes her to space to escape superman. The two begin to fight on the moon(and somehow the normal girl can breathe in space). The two hug each other trying to overpower the other. Superman in a last ditch effort decided to push the moon in front of the sun to depower Nuclear Man. Obviously this would destroy the natural order of the tides of the earth and cause various natural disasters but whatever. Superman then drops Nuclear Man into a power generator which powers up Metropolis. Lex Luthor goes back to jail and the movie ends with a reused shot from Superman(1978).

This movie was awful but kind of hilarious. I had a lot of fun stopping and pointing out all the obvious and hilarious flaws. This film might be fun to watch with friends and rip apart. However it’s very difficult to watch if you are not in the right mindset. I didn’t mention all the dumb stuff in it, just the stuff that stuck out to me. The magic of this movie is watching it and witnessing all the fun flaws.