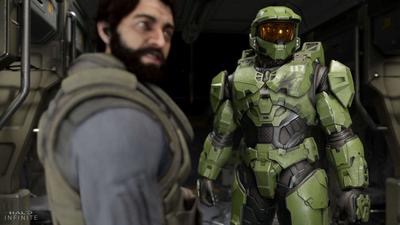 With Halo Infinite set to release this holiday season as a launch title to the new Xbox Series X, the team at 343 Industries also announced they developed a brand new game-engine, Slipspace.

According to Halo Franchise Director Frank O’Connor, the Slipspace engine is designed for “next-generation” game development, and also to be easier to work with.

“We had to create an engine that was more powerful for next-generation development, but also more nimble, so the creatives and engineers are able to work more easily and iterate faster…This technical groundwork is vital to build a platform for the future of Halo.”

In a video from 343 Industries, Engineering Director David Berger said that the new engine allows the team to do things that weren’t possible with previous, older game-making tools.

“Designers are more empowered themselves to actually tackle a problem and prototype something quicker and faster than we’ve ever done before,” says Multiplayer Director Tom French.

It seems that one of the biggest benefits of Slipspace is to modify, create, implement, and update on the fly. Something that Next Gen consoles will want to do. In the era where gamers have a voice to share with those who create these games, it would be wise to hear out what works from the direct thousands, millions that consume the product. And according to the video from 343, it sounds like they are and will listen to your voices. One example of developers listening to its audience, split-screen Co-Op will be returning after it met criticism for its removal in Halo 5. Keep speaking, they’ll keep hearing it!

There is also the rumor of a grapple hook being instituted in Halo Infinite. It was neither confirmed nor denied by the studio, but I take that as developers using Slipspace to try new gameplay mechanics and to see what sticks. Very excited to see what the new game engine can do with the future of Halo.

Halo Infinite is the 6th main game in the franchise, releasing this holiday season 2020 on Xbox Series X, Xbox One, and PC.