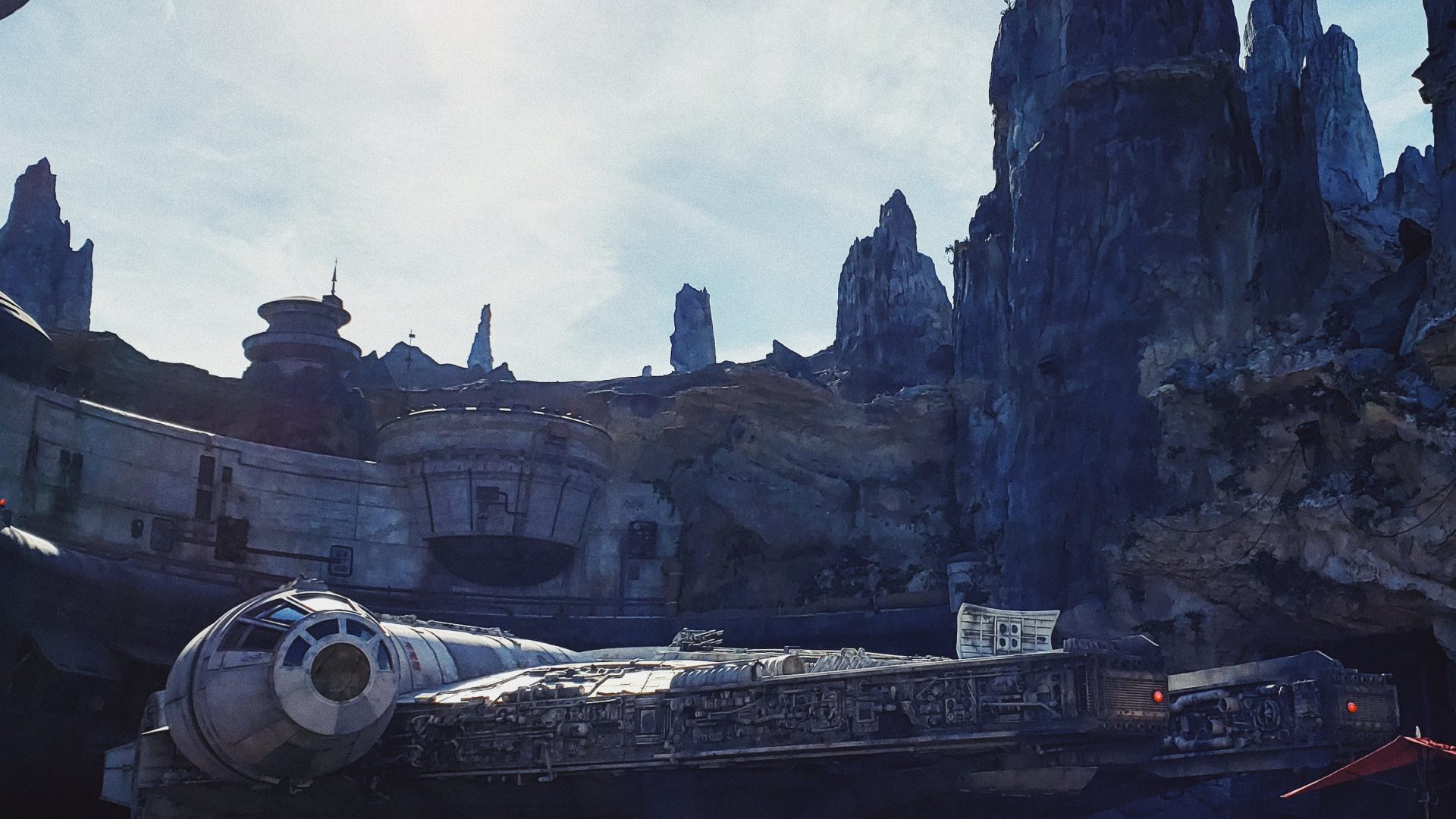 I landed at Galaxy’s Edge on January 2, 2020 and my life will never be the same.

It’s August 2019 and I have just learned that a new Disney trip is in the cards to kick off 2020. My first thought?

I get to go to a galaxy far, far away…

I landed at Galaxy’s Edge on January 2, 2020 and my life will never be the same. My perspective on how Star Wars canon can be manifested, and what Disney can truly do with this franchise given the right creative minds and resources, has transcended what I previously thought possible.

This review will dive into what I thought was great (and not so great) about Disney and Lucasfilm’s most ambitious collaboration yet.

A quick spoiler alert before I continue, because I will be going into detail about Smuggler’s Run and Rise of the Resistance. You may want to experience these rides, and other aspects of Galaxy’s Edge, for yourself first. I should also mention that I have not been influenced by Disney or any other external party when writing this review. These thoughts are mine alone.

Perhaps the greatest challenge presented to Imagineers tasked with creating Galaxy’s Edge was that this addition to Disney Parks was not to be a park at all. It was a project with the ambition of the first Disneyland that would transport guests not only to a separate franchise with its own stories, but as Aladdin once put it, “a whole new world.”

So did the Imagineers pull off the impossible? Was I really in the same galaxy that Luke Skywalker fought Darth Vader in? Where Han Solo piloted the Millennium Falcon? Where countless wars between good and evil raged on for centuries?

Upon entering Galaxy’s Edge, I was in awe. Arriving near the entrance to Rise of the Resistance, I was greeted with a dense forest with the sounds of alien creatures to my right, and towering mountains on my left. Forget Hollywood Studios or Disney World, I wasn’t on earth anymore.

Though the land is the latest addition to Disney Parks, buildings looked as if they’d stood for millennia and blended into their environment. Speeders were parked as if waiting on their drivers to return, and there were plenty of droids with their loud (and occasionally defiant) beeps and boops to remind me that I was indeed in Star Wars.

There are some who have said they would have preferred Disney had made a Star Wars land that instead allowed attendants to visit iconic locations seen throughout the movies.

I can understand such desires, but could one truly enjoy standing outside the Skywalker house on Tatooine without an endless desert sea and twin suns to accompany it? Could I really believe that I am on Hoth while feeling the harsh heat of the Florida or California sun? Sure the nostalgia would have fueled popularity for a while, but it’s the immersive experience that will leave a lasting impression on visitors.

In fact, take away the overwhelming crowd of visitors (Galaxy’s Edge was not “vacant” by any means), and Lucasfilm has themselves a pristine Star Wars set that could easily be used in any movie or Disney+ show.

Experiences – What to Do in Batuu

Speaking of movies, you might as well call a visit to Galaxy’s Edge your own Star Wars story. Join the Jedi of old in creating your own lightsaber at Dok-Ondar’s Den of Antiquities that you can wield just like Luke Skywalker in defending the galaxy against the dark side. Not feeling too force sensitive? No worries! At the Droid Depot, create your own beeping companion who will accompany you in whatever adventures you go on in Galaxy’s Edge.

The merchandise available in the Black Spire Outpost ranges from apparel to show your allegiance to either the mighty First Order or fierce Resistance, to games such as Sabacc and Dejarik (or “Space Checkers”, as it is often referred to).

While I did not have the opportunity to dine at the famous Oga’s Cantina (apparently reservations should be made months in advance, otherwise you wait in line), I gladly enjoyed lunch at Ronto Roasters which served delicious meat wraps.

Plenty of snacks are available throughout Batuu including popcorn at Kat Saka’s Kettle, and the Milk Stand where, yes, you can buy the iconic blue milk that Luke Skywalker drank in A New Hope. I did not have the opportunity to try it, but I was able to obtain some soda at a drink stand that had been smuggled from Earth inside thermal imploders (not real ones, of course).

You may be worried that Galaxy’s Edge won’t provide enough entertainment for adults. Or perhaps you fear that your younglings will grow tired of the experiences available. Trust me, walking around in the land itself could keep a grown one like me satisfied for hours. Luckily, there’s more to Galaxy’s Edge. A lot more…

The Rides – Become a Part of Star Wars

If you decide to hop on board any of the rides at Galaxy’s Edge, prepare yourself. You will tear up on your first time on Smuggler’s Run if you have any familiarity with Star Wars, because you will step onto the Millennium Falcon. On the other hand, make sure you take your clan to the nearest Outpost restroom before going on Rise of the Resistance. It’s a full 20-minute experience.

Smuggler’s Run is a simple simulator ride, but the experience really begins when you enter the interior of yes – the Millennium Falcon. As I saw those faded white walls and circular hallways, tears welled up faster than lightspeed. These were steps that Luke Skywalker, Obi-Wan Kenobi, Chewbacca, C-3PO, and R2-D2 had all taken in movies that defined my childhood. Following a short wait in the lounge area of the Falcon, each member of my party was given a role for when we entered the cockpit.

I cannot describe the feeling I had as I entered that hallowed space. The experience of sitting in one of those chairs, seeing the controls, and the flashing lights around me is one that I will treasure forever. Once I was able to gain my senses, I remembered that I was on a ride, and I had duties to attend to if this smuggler’s run was to be successful.

Don’t let the responsibilities scare you away though, because all they consist of is pressing buttons that light up for you. There are six people for each “run” who are divided into three teams of two pilots, gunners, and engineers. One pilot steers the Falcon left and right, the other up and down. The gunners are supposed to use laser canons to clear the path of any enemies who may cross your path (hint, they cross your path). Engineers are there to fix the ship whenever the pilots run into something or the gunners fail to strike down an enemy. Trust me, their help will be needed.

Rise of the Resistance is a different story. Though I said there will be spoilers, I will do my best to not reveal as much as possible about this ride. But here is what you need to know.

If you are a Star Wars fan, and I mean someone who has been truly touched by this franchise, your life will never be the same when you exit this 20-minute experience. When you enter Rise of the Resistance, you become the one of the galaxy’s heroes, and the evil First Order becomes your enemy as you navigate through a ride that combines enough technology and illusions to truly give you the feeling that you are inside a Star Wars movie. It’s the crowning achievement of both Galaxy’s Edge and Disney’s imagineering, and it’s well worth any wait you endure to experience for yourself.

The Not so Great

Obtaining a Boarding Pass for Rise of the Resistance

Luckily, there isn’t much in terms of “not so great” at Galaxy’s Edge, so I will try to make this as quick as possible. First is the process for receiving a boarding pass, which is the only means of gaining entry to Rise of the Resistance.

In order to get a boarding pass at Disney World (I cannot attest to what the system will be when it opens at Disneyland), you must be in Hollywood Studios by opening time (which happened to be 7am for when we were there). Once inside the park, you must compete with literally thousands of disgruntled vacationers to compete for a limited number of online boarding passes. Luckily, one boarding pass will take on all the members of your party, but the process itself falls apart quite quickly in practice.

Thousands of phones on the Disney World app at once cause a slew of technological nightmares including freezing screens, endless loading, and crashes. Even if you manage to somehow grab a pass, any number higher than the 110’s has a decreased chance of actually being able to ride. This is because there are only so many people who can actually get on the ride during operating hours. However, don’t lose hope. My group was 128 and managed to get in line not long after the twin suns set. Regardless of my experience, I am sure there were others who were not as fortunate, and therefore the system needs to be improved. It causes stress, conflict, and is not the best way to start your day at the most magical place on earth.

Disney World has never been cheap (and likely never will be), but the prices in Galaxy’s Edge are pushing it. I do not claim to be an economics expert, but $35 for a short-sleeve t shirt is a bit much. This is especially true when I can purchase a Star Wars t shirt for $25 outside Galaxy’s Edge, but still within the shops of Hollywood Studios.

The lucrative price tags continue from apparel to the experience of constructing your own lightsaber (which will run you a couple hundred dollars), and making a droid at the Droid Depot (which could put out of a couple thousand if you’re Kenobi-level bold).

A price tag should not be put on these priceless experiences in the first place, but the laws of economics unfortunately demand that money be required to operate Galaxy’s Edge. Thankfully not all available merchandise is outrageous, and I do recommend you pick up at least one souvenir to remember your trip to Batuu by.

Galaxy’s Edge Should Have Been It’s Own Park

While the land itself provides plenty of experiences to make any Star Wars fan’s dreams come true, Galaxy’s Edge needs room to breathe. The amount of traffic I experienced at the surrounding attractions within Hollywood Studios could be (at least partially) traced back to the fact that the largest Star Wars attractions ever built resides within its walls. Of course, a completely independent Star Wars park would likely never see an empty day given the right attractions, but more space for this space opera’s land would be appreciated.

A dedicated park could also increase the immersive value of a Disney-operated Star Wars land. Despite the immense and overwhelming joy I experienced in the Black Spire outpost, I couldn’t help but wonder what it would be like to visit a park that didn’t have Muppet Vision 3D with Ms. Piggy’s statue glaring at me after exiting a galaxy far, far away.

Despite its few shortcomings, Galaxy’s Edge is an undeniably necessary experience for all fans of Lucas’s 1977 cinematic miracle. The land adheres to the exact feeling of wonder and adventure that Luke Skywalker once held in his heart before becoming the galaxy’s greatest hero.

Fulfill your destiny and stop by Batuu if you ever have a chance. A galaxy of adventures awaits you.