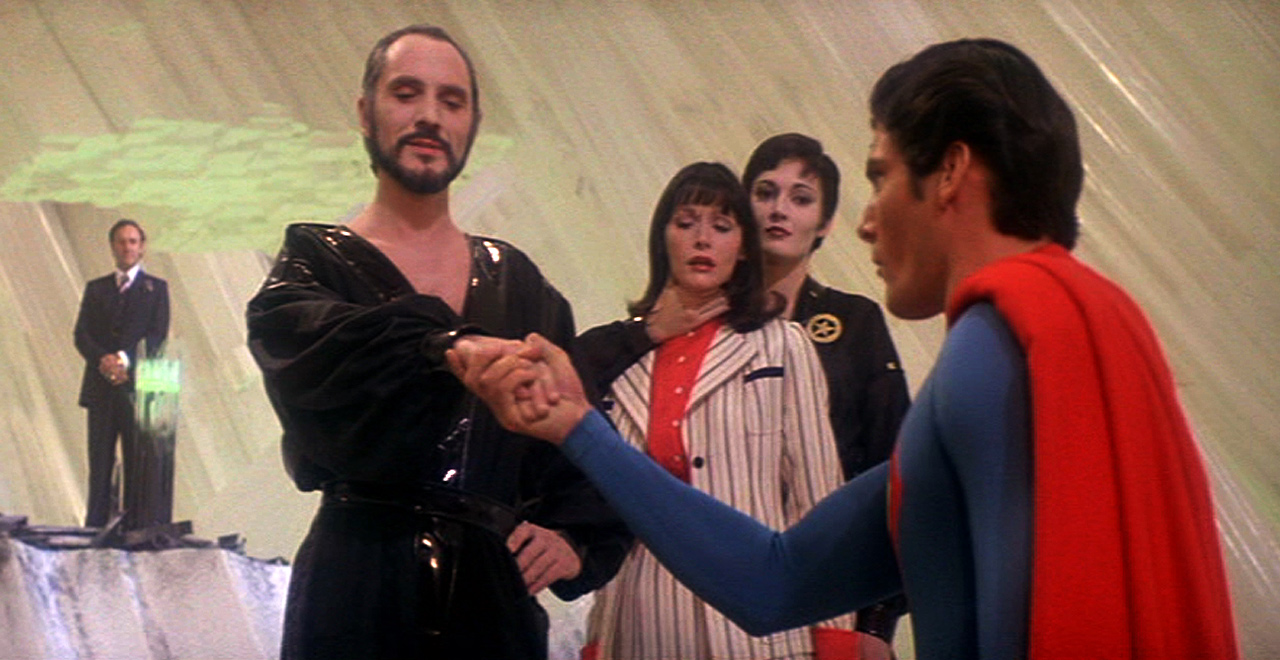 Superman(1978) was a huge success upon release. It was well received by critics and moviegoers alike, and grossed over 300 million dollars. Comic fans were pleased, Normal people were in awe at the film. However due to creative differences and going over budget, Richard Donner(The original director of Superman) was fired, and replaced by Richard Lester. The theatrical cut will be the version I’m reviewing today, however, be on the lookout for a review of the Donner Cut soon. Even with all the behind the scenes drama, this movie was still a success, it had some positive critical reception and grossed over 190 million dollars.

The plot revolves around Superman saving paris by throwing a nuclear bomb into space, by doing this he unwittingly frees 3 kryptonian criminals from the phantom zone. General Zod, and his two accomplices Ursa and Non, have arrived on earth and are set on world domination. At the same time Superman struggles to balance his relationship with Lois and his responsibility as a superhero.

Like the last movie the best part is its incredible cast. I’ve already talked about how amazing Christopher Reeve, Margot Kidder, and Gene Hackman really are but the newcomers are great too. Terrance Stamp gives such a memorable performance, his Zod is the right amount of arrogant and terrifying. Terance isn’t afraid to bring humor to the role, a specific instance where the president says “Oh God.” In terror, he corrects him by saying his name his Zod.

What’s really nice here as well is the relationship between Superman and Lois Lane. It’s not only bolstered by Kidder and Reeve’s amazing chemistry, but the writing here is also very nice. Superman is forced to reveal his identity to Lois and because of his love for her, he makes a hasty decision to give up his powers to be with her. Similar to Spider-Man 2, Superman realizes he has greater responsibilities to uphold which prevent him from leading a normal life. The Superman franchise did the story of a Superhero struggling with power, responsibilities, and a personal life before it was the cool thing to do. The ending to this plot is bittersweet to me, as we see Clark wipes Lois’ memories with a kiss, losing her love but sparing her the burden of him in the process. On the one hand it’s beautifully sad, on the other, the memory wiping kiss is so specific, contrived, and convenient. It completely pulls you out of the film, and comes across as convenient.

Overall, this movie is a lot fun but has a big heart at its center. It may be campy but that’s part of the fun. It’s helped by amazing performances from actors giving it their all. It’s a real treat for any Superman fan, but of course every Superman fan already knows this. This movie holds up very well even after 40 years.