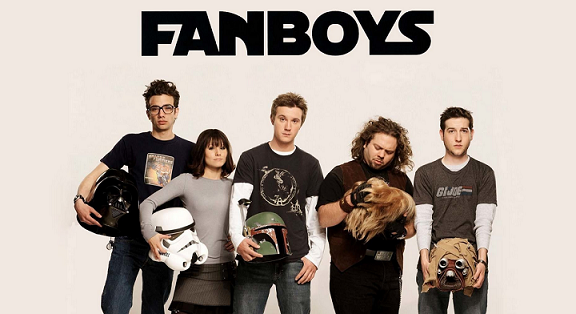 Fanboys was released in 2009, directed by Kyle Newman. It stars Sam Hunnington, Dan Fogler, Jay Baruchel, Chris Marquette, Kristen Bell, and Seth Rogan. The plot revolves around a group of friends who try to break into Skywalker ranch to see the rough cut of the “new” Star Wars movie. The movie wasn’t well received critically, and was far from a financial success.

So did I like this movie, I absolutely did. What I love most is the chemistry between the actors. They all work really well together and the acting on display really makes the characters pop. I thought the writing was actually really good too. This film succeeds in getting us to care about these characters and why they do what they do. They aren’t just nerds who break in to Skywalker Ranch for no reason, they have a convincing motive for why they do it. Star Wars fans will have a blast with all the fan service and fun references. The references don’t feel cheap or forced because not a lot of attention is given to them, and the character’s are written to the point where I believe they would quote Star Wars so nonchalantly. There are also a TON of fun and cameos, and a few even surprised me but were a treat to see.

This is not a perfect film however, The pacing can be kind of slow because the film detours a lot from the main plot, and makes up excuses to get the characters into funny situations. There’s also a romantic subplot that doesn’t really do anything and kind of shows up out of nowhere. Also I’d say this movie is very committed to its target demographic, So I Imagine that might make it hard for non Star Wars fans to enjoy. That wasn’t a problem for me obviously but it’s just something I noticed.

This movie is a treat for Star Wars fans. It has enough cameos and references to make you happy but it has a beating heart at its core. Although the film has poor pacing and a bad romantic subplot. When I watched this movie I was reminded why I’m a Star Wars fan, and made me nostalgic for time the fan base wasn’t so divided. I think any and every Star Wars fan should watch it, it’ll remind you and even reward you for your love of the franchise.