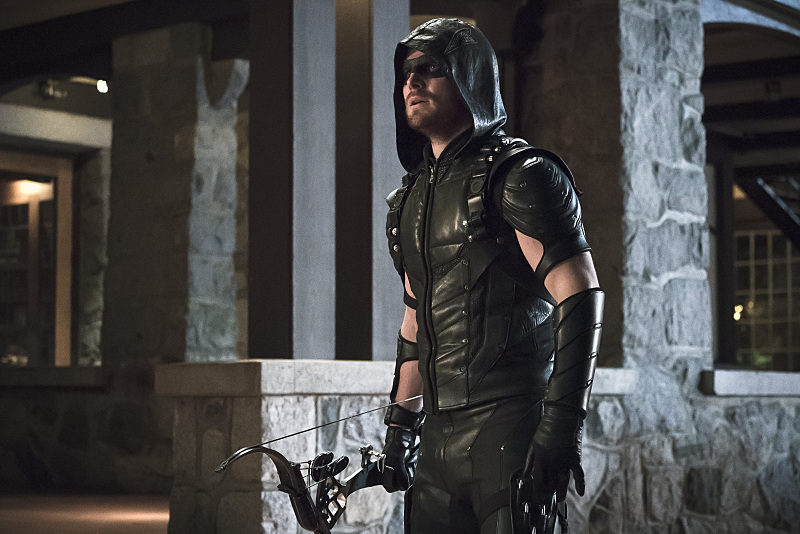 Sadly we’ve come to the lowest point in Arrow’s run. Season 4 is the one season everyone collectively rolls their eyes at. But in spite of this, I sat down and rewatched the entire season. So without wasting anymore time, let’s get into this review.

Arrow Season 4 once again stars Stephen Amell, David Ramsey, Emily Bett Rickards, Willa Holland, Katie Cassidy, and Neil Mcdonough. The plot revolves around Oliver Queen returning to Star City to combat a terrorist group called the Ghosts. With the help of Team Arrow, he fights against the leader of the Ghosts, Damian Dahrk, who uses magic against the team.

As always I’ll start with what I liked. The costumes actually look a lot better this season. The leather suits have become more tasteful and comic accurate, they’ve come a long way from the realistic leather jacket and pants look. Each costume seems to distinguish each character through color, Oliver is of course green, Thea is red, and laurel is black. Admittedly though Diggle AKA Spartan has the worst costume in the show. The helmet looks like a cheap Party City mask and the rest is just bland leather(thankfully this design was improved in later seasons)

The acting is also very good as well. Each actor does the best they can with the material they work with. Stephen Amell as always brings in a good performance as he’s now so comfortable in this role. The stand out actor here for me was Neil Mcdonough. He’s the only actor here that embraces the absurdity of the material he’s been given. He has so much fun with this role and it shows, he is really the strongest part of the season.

On to what I didn’t like. I could not stand the actual plot of this season. The tone changes so drastically from season 3, the emphasis being more on comedy and witty banter like an MCU film. This tone doesn’t really work and really undermines the previous seasons which took themselves very seriously. The inclusion of magic kind of breaks the semi realistic tone built up by previous seasons. I’m well aware there is heavy sci-fi in this show through the Atom. Yes, there were hints of magic in season 3 but it was subtle and only really implied. Season 4 outright shows us magic and mysticism and it’s quite jarring. Although thankfully it leads to the best episode of the season, the Constantine one.

Another major issue with the season everyone seems to share is the focus on the Oliver and Felicity romance. This relationship does not work in the slightest for several reasons. While the actors may have nice chemistry, the bad writing diminishes any chemistry the actors can create. Felicity hasn’t been developed very well as anything more than comic relief, so the choice to put a focus on her character with little development up to this point. Not only that but the season turns felicity into a horrible person. She blames Oliver things that weren’t his fault like keeping his son a secret. She also shows no remorse after allowing thousands of innocent people to die. This romance doesn’t have anything that really strengthens or actually challenges the characters even.

I could go through some of the other smaller problems this show has, but if I went in depth with all these problems this article would be way longer than it already is, so I’ll just shotgun through them. Donna Smoak is one of the worst characters I’ve ever seen on TV, she is so out of place and doesn’t really do anything. Damian Dahrk’s plan to destroy Star City is unoriginal and feels like an afterthought. Curtis Holt is not a well thought out character, he’s only there to replace Ray Palmer and he’s basically a copy and paste of him, Mr. Terrific deserves better than this.

This season is incredibly difficult to watch. While the actors do their absolute best, the actual plot is half baked, not fleshed out, and the character development is lackluster. The magic elements and poor characterization break the tone of the show. The Olicity relationship doesn’t work at all and drags the show down completely. If you plan on rewatching the show i suggest just skipping this season entirely.