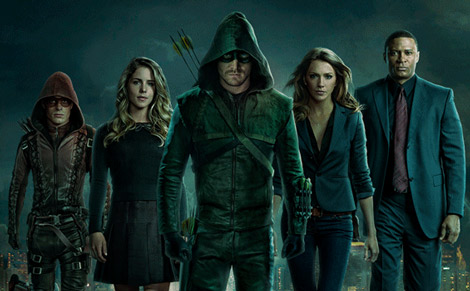 Arrow is one of the most inconsistent TV shows I have ever seen. One season can be really good, then the next is absolutely abysmal. This season falls somewhere in between, sort of a middle ground between the good and the bad of the show.

The first half of this season revolves around Oliver Queen trying to find out who killed Sara Lance AKA The Canary. This plot point is actually kind of interesting, they have a cool idea to force Oliver to protect his arch enemy Malcom Merlyn because of his moral code. It’s also cool when they later use Roy as a red herring and made everyone even Roy himself question himself. However the ultimate reveal is a bit dissatisfying. It’s revealed Malcom Merlyn had mind controlled Thea to kill Sara. He does this to force Oliver to take the blame for Sara’s death. This happens so Oliver will be forced to fight Ra’s in a trial by combat so he can erase Malcom’s blood debt. This really makes no sense because Oliver could barely beat Merlyn, but is now expected to beat the most dangerous man in the world. This half ends with Oliver unsurprisingly losing to Ra’s and “dying”

The second half has Team Arrow poorly defending Starling City from the crime lord Brick. Laurel also takes up the mantle of Black Canary and is slowly becoming a capable vigilante. Oliver returns to the city but this victory is short lived as Ra’s Al Ghul frames Oliver for various murders. Roy saves Oliver by saying he was the Arrow all along and then fakes his death. In one last effort to defeat Ra’s Al Ghul, Oliver joins the League Of Assassins to defeat it from the inside. With the help of Malcom Merlyn oliver defeats Ra’s Al Ghul, and prevents a virus from killing everyone in the city. However Team Arrow’s trust of Oliver is diminished as he worked with Malcom Merlyn and not them.

Let’s start with what I did enjoy the action. Even though it’s a bit of a downgrade from last season, but it’s still pretty solid. The choreography gets pretty creative at times, especially with the later reintroduction of the League Of Assassins. As I said it wasn’t as good as previous seasons, but overall it’s pretty solid.

The costume department did a very good job for this season. Sure a lot of the character’s costumes did amount to just an elaborate leather jacket, but they got really creative with it this time around. My favorite costume had to be Ra’s Al Ghul’s. It looked like it came from a comic book page with the stylized robes. Roy also got a great look which looks less like his arsenal costume and more like his Red Arrow one. It’s still good and my jaw drops every time I see it.

From the first episode of the season, we are introduced to the first problem which has festered throughout the rest of the show. Felicity Smoak and Oliver Queen, it’s not especially bad in this season, but it leads to some issues with Felicity’s character. Her love for Oliver causes her to make some really selfish decisions. For example In the finale she wants Ray to stop inoculating the city from the Alpha Omega just to save Oliver. It’s a choice that makes Felicity seem short sighted and kind of selfish. Her whole character really suffers throughout this whole season.

Another problem I have is the villain, the demon’s head himself, Ra’s Al Ghul. He’s so bland and uninteresting as a character. He doesn’t really have any motivations, he just wants to fulfill some prophecy. It’s also really strange that they build him up as the greatest fighter on earth, but when you see him he has dad bod. I really started laughing because this guy was supposed to be the most dangerous man on earth and he looks like your friend from middle school’s dad. The acting is actually pretty lackluster. He’s not intimidating or threatening, or even cold and calculating. It’s like the actor had no idea who this character was or even what kind of show he was in.

Overall I did like this season, it’s a step down in quality but not a massive one. The action is solid and easy to enjoy. The costume design adds to the new comic booky atmosphere and lucky for us the costume design only got better with time. However the villain and pacing of the season drag it down a bit. People who say this season is where Arrow became the worst superhero show are exaggerating, that one is season 4.