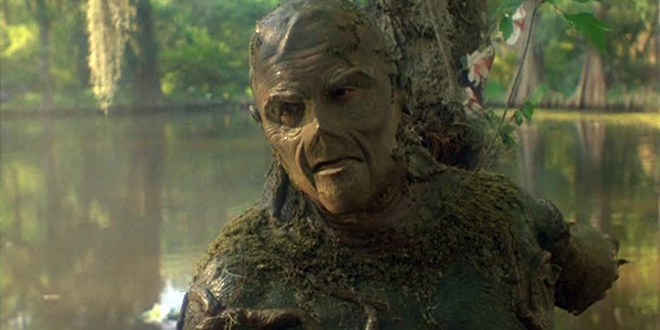 Swamp Thing was released in 1982, Written and Directed by Wes Craven. The film stars Adrienne Barbeu as Alice Cable, Ray Wise as Alec Holland, Louis Jourdan as Anton Arcane, and Dick Durock as Swamp Thing. The plot centers on a new scientist named Alice Cable going to work with Alec Holland on a formula helped to increase the survivability of plants. Meanwhile an evil scientist named Arcane wants the formula for himself, but a mysterious creature in the swamp is set on stopping him.

I actually enjoyed this film quite a bit, I should have known considering it’s directed by the guy who made A Nightmare On Elm Street, one of my favorite horror movies. The direction of the film is stellar, Craven expertly crafts an atmosphere around the swamps, being both tranquil yet mysterious. This may sound like a back handed compliment but I assure you it’s not, I love how cheesy this movie is, there has always been a certain level of cheese to 80’s horror films like Friday The 13th. That lovable camp is in this movie as well which just made it all the more enjoyable for me. Swamp Thing as a lead is incredibly sympathetic, his sadness is conveyed mostly through visuals and physical acting, and that makes it more impactful as you aren’t told how he feels, you just feel it with him.

This isn’t a perfect film though, it definitely has its fair share of problems. For one the villain of film, Arcane, is so generic, his motivations are generic, his plan is generic, there isn’t anything interesting about this character at all. The pacing is also very sluggish, this is due to the fact that there just isn’t enough material to fill an hour and thirty minute movie, so the action scenes are often stretched thin. Another thing, yes, the swamp thing suit is very dated, it’s very obvious how rubbery the suit looks. I don’t hold that against the film really, because I’m sure it was the best they could do at the time, but nonetheless I felt the need to mention it. Another problem is there just isn’t any believable chemistry between Alice Cable and Swamp Thing, the movie tries to make the two seem like they have feelings for each other but there’s no time devoted to it, which makes it feel hollow.

Despite the pacing issues and the unoriginal villain, this film delivers on suspenseful action and cheesy 80’s fun. It’s character work is great, the protagonist is proactive and sympathetic. I’d say this film is worth watching for both comic fans and horror fans, and especially for fans of both, like myself.