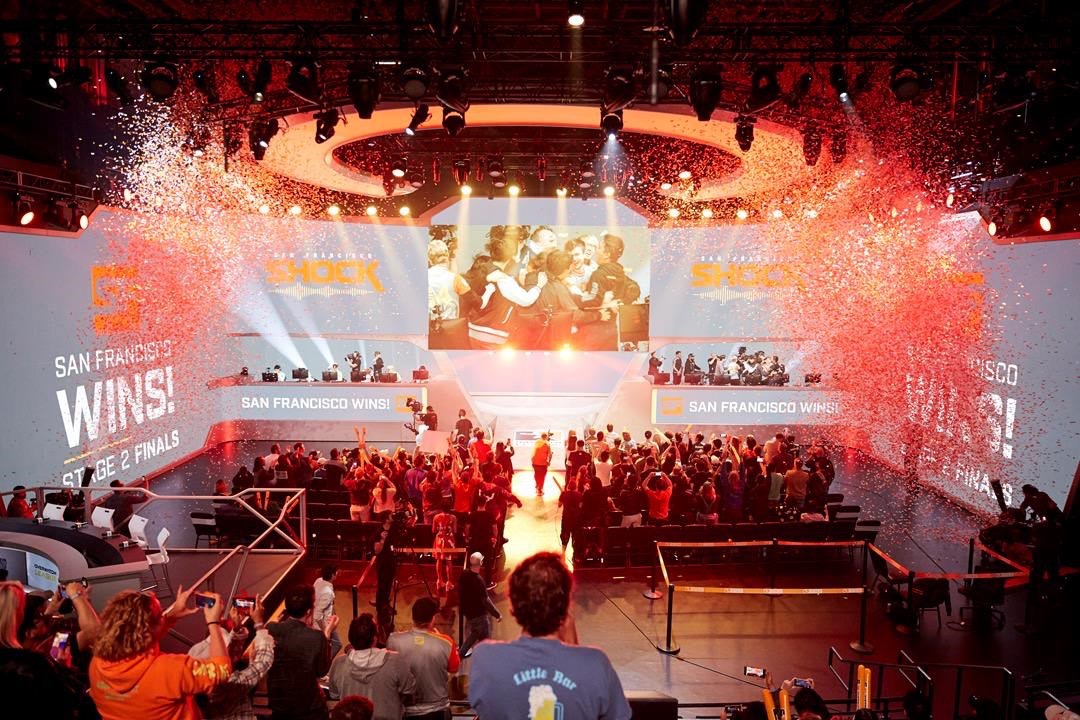 The Overwatch League’s Grand Finals occurred Sunday evening; a highly anticipated match-up between the two biggest rivals to come out of Season 2. The San Francisco Shock’s versatility and teamwork allowed them to steamroll the Vancouver Titans in a crushing 4-0 shutout victory.

Overwatch is a 6-v-6 team shooter made by Blizzard for PC, PS4, XBox One, and soon to be on Switch. There are currently 31 playable heroes in the game, with a new one being released every three months on average. These heroes fill the roles of Support, Tank, and Damage. Players battle across 28 different maps in different game modes, most commonly fighting the other team for control of a point in the map or trying to get a payload through various checkpoints along a route. The game launched in mid-2016, quickly grew its player base, won Game of the Year 2016 (as well as over 100 nominations from different publications) and began it’s foray into the world of professional Esports in 2018 with the launch of its professional league. The Overwatch League began with 12 global teams for its inaugural season, and added another 8 for the start of Season 2 in 2019. Seasons have four stages, each stage running for 4-5 weeks and culminating in a playoff bracket. The stage playoffs determine which teams make it to the season playoffs at the end of the year.

The San Francisco Shock were one of the original 12 teams in the 2018 season, and they finished the season with a losing record of 17-23 in 9th place overall. The Vancouver Titans were one of the new expansion teams in 2019, and immediately asserted their dominance over the other teams. They had a perfect record for Stages 1 and 2, not losing a match against any other team. They also showed an aggressive presence in interviews, with their main tank player Sang-beom “Bumper” Park in particular touting the ease in which they would take the proverbial crown.

Vancouver went lossless in Stages 1. They faced off against San Francisco in the Stage 1 playoffs, and won. They played another perfect stage next, and faced the Shock again in the Stage 2 playoffs. This time, San Francisco won, taking down the Titans for the first time since their debut, ending their 19-game win streak. At this point, the Titans’ momentum wasn’t quite shaken. The Shock had put up a good showing in the 2019 season and had lost to them in the previous playoffs.

The Titans went on another long win streak into Stage 3 until they were soundly defeated by the Los Angeles Valiant – the lowest ranking team at the time. The major upset revealed chinks in the armor as they were then kicked out of the Stage 3 playoffs by the Shanghai Dragons, who had gone winless last season.

A game like Overwatch tends to be ever-changing. The release of new characters always tends to shake up the game’s play style, popular hero picks, and commonly-used strategies – often referred to as the ‘meta’. From the beginning of Stage 1, the primary meta was “GOATS” (named after the team that popularized the style, also called 3-3 or triple-triple) – a strategy that involved playing in a tightly-knit group of three tanks and three supports. The heroes chosen for the strategy were Reinhardt, Zarya, D.Va, Lucio, Zenyatta, and Brigitte, with only a few variations. Without going into too much detail, suffice it to say that the strategy was highly sustainable in long, drawn out teamfights. It wouldn’t be much of a stretch at all to say that this was the Vancouver Titans primary (and maybe only) strategy, and they were the best at it. The only real counter to this strategy was to mirror it, which made for very long and somewhat uninteresting matches. Some teams, like the Shanghai Dragons, experienced minor success by countering it with a 4 Damage – 1 Tank – 1 Support strategy; however, this highly-mobile strategy was hard to sustain. If the teamfights weren’t decisive, the match would likely be lost in the long run.

At the beginning of Stage 4, Blizzard’s Overwatch development team introduced Role Lock, a feature that forced the team roles into 2 Tanks, 2 Damage, and 2 Support. While this was a feature that had been in research and development for over a year, it had the practical effect of immediately shutting down the GOATS meta. Vancouver wouldn’t be able to play their signature style in Stage 4. This didn’t seem to slow down the Titan machine much at first, as their first three games were against lower-ranked teams and would allow them to practice new strategies without too much risk. This line of thinking ended full stop in their third game of Stage Four when the Washington Justice (previously tied for last place with the LA Valiant) shut them out 4-0 in a monstrously one-sided match. Conversely, the Shock had secured themselves a comfortable number 3 spot in the rankings by quickly mastering the new meta and reinforcing themselves as a threat. Vancouver got their feet back under them before losing again to San Francisco two matches later, and ending the stage with a still-impressive 5-2 record.

The season playoffs were unique to the stage playoffs in that they used a double-elimination bracket. This turned out to be good news for San Francisco, as they got knocked out in the first round by up-and-coming meta stars, the Atlanta Reign. Vancouver defeated all of their opponents, sending them down to the losers bracket, where Shock quickly made short work of them and rose to the top of the losers bracket.

One other notable difference for the playoffs was the introduction of a new Tank hero, Sigma. Sigma’s high-skill ability kit included barriers and gratuitous crowd control, making him a must-pick for most pros in the 2-2-2 meta. Vancouver’s primary tank, Bumper, was benched in favor of a mid-season acquisition, Jang-hyeon “TiZi” Hwang. Reportedly, TiZi was better at Orisa and Sigma, while Bumper’s primary heroes, Reinhardt and Winston, were no longer considered “in the meta.”

The Vancouver Titans and the San Francisco Shock faced off for the last time at the Grand Finals on September 29th at the Wells Fargo Arena in Philadelphia. At the beginning of the match, casters and analysts predicted the match would primarily come down to how well the teams respective Doomfist players performed: Jay “sinatraa” Won for the Shock, and Hyo-jong “Haksal” Kim for the Titans. The tilt of the match was decided early on when, in the first few moments of the first map, Sinatraa built his ultimate ability in record time and landed a combo with his teams Orisa, resulting in a three-player kill and a quick first round victory.

While the match was far from being one-sided, it was soon clear how well the teams matched up against each other. Shock switched out Damage players every other map, and the Titans couldn’t seem to keep up. A quick map completion on Anubis seemed to turn the tide in their favor, but Shock were able to wrestle back a win in over time. The battles were close, the maps hard-fought, and quality plays and quick team kills were prevalent from both teams, but in the end, the San Francisco Shock defeated their a rivals in a 4-0 shutout.

San Francisco now joins the London Spitfire as Overwatch League Champions, and if history repeats itself, the Shock will receive a custom in-game skin to mark their achievement.

Overwatch Season 3 will have all teams playing matches in their own towns, and it will be interesting to see how the hometown presence of either team will greet their rivals. Overwatch League continues to climb in popularity and I can’t wait to see what the future holds for the OWL.