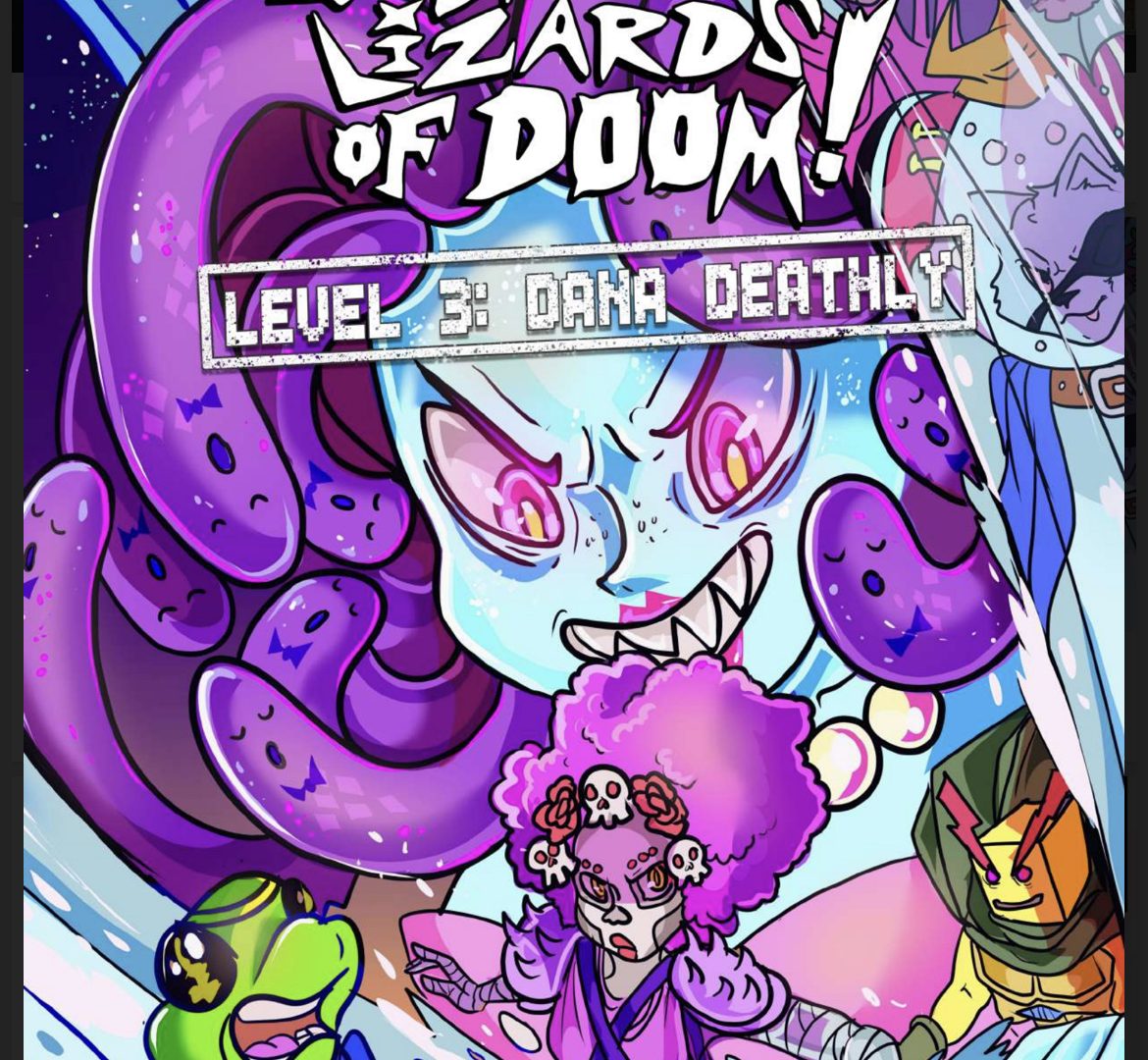 Brought to you by the talented and imaginative mind of Gabriel Valentin, the Digital Lizards of Doom graphic novel is now on their 3rd installment with ‘Digital Lizards of Doom Level 3: Dana Deathly’. Are you jonesing for Level 3 and need to know where to support and reserve your copy? Look no further than right here as the Kickstarter is now live!

Have you missed out on what Digital Lizards of Doom is? Well in short, it is a love letter to pop culture! A visual trip unlike you’ve seen before that combines unique style and bold colors that remind you a bit of the 80s and 90s with a hint of the future. Digital Lizards of Doom brings you creative familiarity in a completely unique way. Not only can you experience the graphic novel, but the team behind the books also brings you music (found on Apple Music, Spotify, Youtube, and Amazon) that compliments the story and characters. Not just a total package, but a full experience!

“An ancient pineapple demon traps a group of characters from another dimension inside of a video game simulation and a quest for the truth begins!”

When Commander E.K.O., and an evil witch, Warty Morda, attack the peaceful Kingdom of Kragladon, our hero Dizzy Doom must go on a quest to retrieve a fabled weapon to bring peace back to not just his home world, but the entire universe! On Dizzy’s quest, he uncovers truths he may or may not want to hear and meets some compelling characters along the way. Including a cyborg pirate cat! (Seriously, a cyborg pirate cat!)

‘Digital Lizards of Doom Level 1: Dizzy Doom‘ first launched back in 2020. But years prior in 2014, Valentin made a great impression with San Diego Comic-Con Co Founder and San Diego Comic Fest Founder, Mike Towry, that years later would then write the initial introduction of book one. Just last year stand-up comedian and host for Comicbook.com, Chris Killian, not only wrote the introduction for book 2 (‘Digital Lizards of Doom Level 2: Commander E.K.O.‘), Valentin wrote Killian into the story with and epic battle you don’t want to miss!

What’s in store for book 3? We can tell you that Ray Porter of Zack Snyder’s Justice League and Neil Gaiman’s Sandman, will guide the reader into ‘Digital Lizards of Doom Level 3: Dana Deathly‘, with a special introduction to start the next installment.

“To be allowed into the world created by Gabriel Valentin isn’t as easy as saying “lets go for a ride”. No. It’s more like saying “be ready to jump in when this thing comes sliding sideways towards you with the door half open and the accelerator firewalled.

So strap in my friends and make sure you brought some snacks because Digital Lizards of Doom is a wild ride!”

We won’t give away any spoilers, but here is what to expect!

“The adventure picks up after the events of level one and level two where protagonist Dizzy Doom has been forced to leave his planet after a devastating attack! Now he must team up with a zombie ninja (Dana Deathly), a dryad (Shaker Spears), and a cyborg (Fat Cat Rogers). This band of unlikely heroes will race towards the doughnut planet of the emerald mermaid, in search of a magical weapon that will challenge the other-worldly powers of an ancient pineapple demon known as Pineapple Pete.

The Digital Lizards of Doom team wants to show people things they’ve never seen (and heard) before and to entertain and question our understanding of reality with their exciting new world they created!

With that being said, Digital Lizards of Doom has teamed up with ComicBooks 4 Kids with a special Kickstarter tier that has a “buy one, give one” option that will allow all said books to be donated to ComicBooks 4 Kids and then distributed to over 200 children’s hospitals in the U.S. and U.K.

Make sure to reserve your copy today and in the meantime, check out the Digital Lizards of Doom albums to get a feel of the atmosphere you are about to dive head first into! That’s right, these guys literally rock! Take it to the next level and visit dlodworld.com check out the gear that will surely be a topic starter.

Digital Lizards of Doom is proudly being published by Lesser Known Comics.

‘Digital Lizards of Doom Level 3: Dana Deathly’ is created and written by Gabriel Valentin and illustrated by Ceri Langell. Produced by Chance Boren of Transformers: Infiltration and Metal Gear Solid: The Comic Series

“Strength without Love is dangerous, Knowledge without Strength is useless and Love without Knowledge is careless”

-Some Random “Know It All”