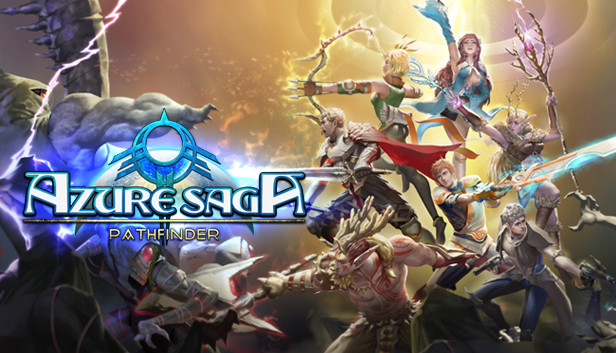 Azure Saga: Pathfinder is a turn based JRPG developed by MassHive Media for Nintendo Switch, PC, and now mobile. While this game has a unique premise and a gorgeous art style, I was overall unimpressed with the combat and exploration. While some aspects of the game I did like, others I just found to be very frustrating. For this review I will be focusing on the mobile version of the game.

The story here focuses on Synch, a young explorer in search of his father. His quest leads him to a foreign seemingly less developed planet. Synch and his companion droid Noide, and others team up to escape the planet and find Synch’s father. The story here is good but nothing amazing. I never found myself shocked or emotional but I understood the characters and their motivations. The dialogue can be a little stale and generic at times but I never cringed at it. The plot works and it’s very easy to just turn your brain off and immerse yourself in the gameplay.

What grabbed my attention most was the incredible art style and presentation of the game. Pathfinder marries the styles of science fiction and fantasy, and while that could lead to conflicting designs and an inconsistent style, Pathfinder makes it work. While the differences are apparent, there is a great level of consistency that I appreciated. The color palette is visually pleasing, I was always happy to explore because the different maps all look so nice and distinct.

This game’s performance was excellent on mobile. I didn’t notice any slowdown, and it ran very smoothly. Load times were quick and unnoticed which is very appreciated. I didn’t encounter any glitches or bugs of any kind. The overall performance of this game was really remarkable.

For movement, the game has a tilted top down overview of the area you’re in. You move around with a joystick icon in the lower left corner. I noticed the Joystick decision made my movement feel a little sluggish and clunky. I think a D-pad Icon would have been a better fit here. While not a major problem, the joystick did make exploration only slightly tedious.

Combat is turn based but in this case, everyone in each party moves at the same time. Each character has a basic attack, and special attacks they unlock by leveling up. There is also a feature called united attack, which sees your party pool their special attacks for a combined amount of damage. However only certain party combinations have united attacks and has you choose who to comprise your party of. I like this element, it brings a layer of strategy, and it really made me think about who I’d want with me for combat.

I noticed a lack of real enemy variety as well. Sure, most enemies have a distinct visual look and might be weak to a special attack, but their move sets are really similar, it makes combat feel quite tedious. They’re just isn’t enough variety in the enemies to make the combat very engaging.

The music was pretty good background music for whatever I was doing. A lot of times in JRPG’s I just turn on my own music but I didn’t feel the need to do that here. The sound effects however were pretty underwhelming, I noticed a lot of stock and reused sound effects over the course of the game. I noticed a lot of characters, despite using different weapons, had really similar sounding attacks. I think more diverse sound effects would go a long way in helping the combat as well, making each character have a distinct yet powerful sounding attack.

Pathfinder has many different areas to explore with some secrets and side quests along the way. However, none of these secret items or even the side quests interested me at all. The items you gain aren’t weapons or armor, just rings and necklaces. If the game had more varied loot and more secrets hidden in it’s worlds, I’d definitely come back to it.

Azure Saga: Pathfinder has some great art style and wonderful ideas in it. A lack of polish makes the game often feel like a chore to get through however. Pathfinder would have benefited from more diversity in how their enemies function and the loot. I’d say in its current form, tedious and repetitive combat keep me from recommending the game.