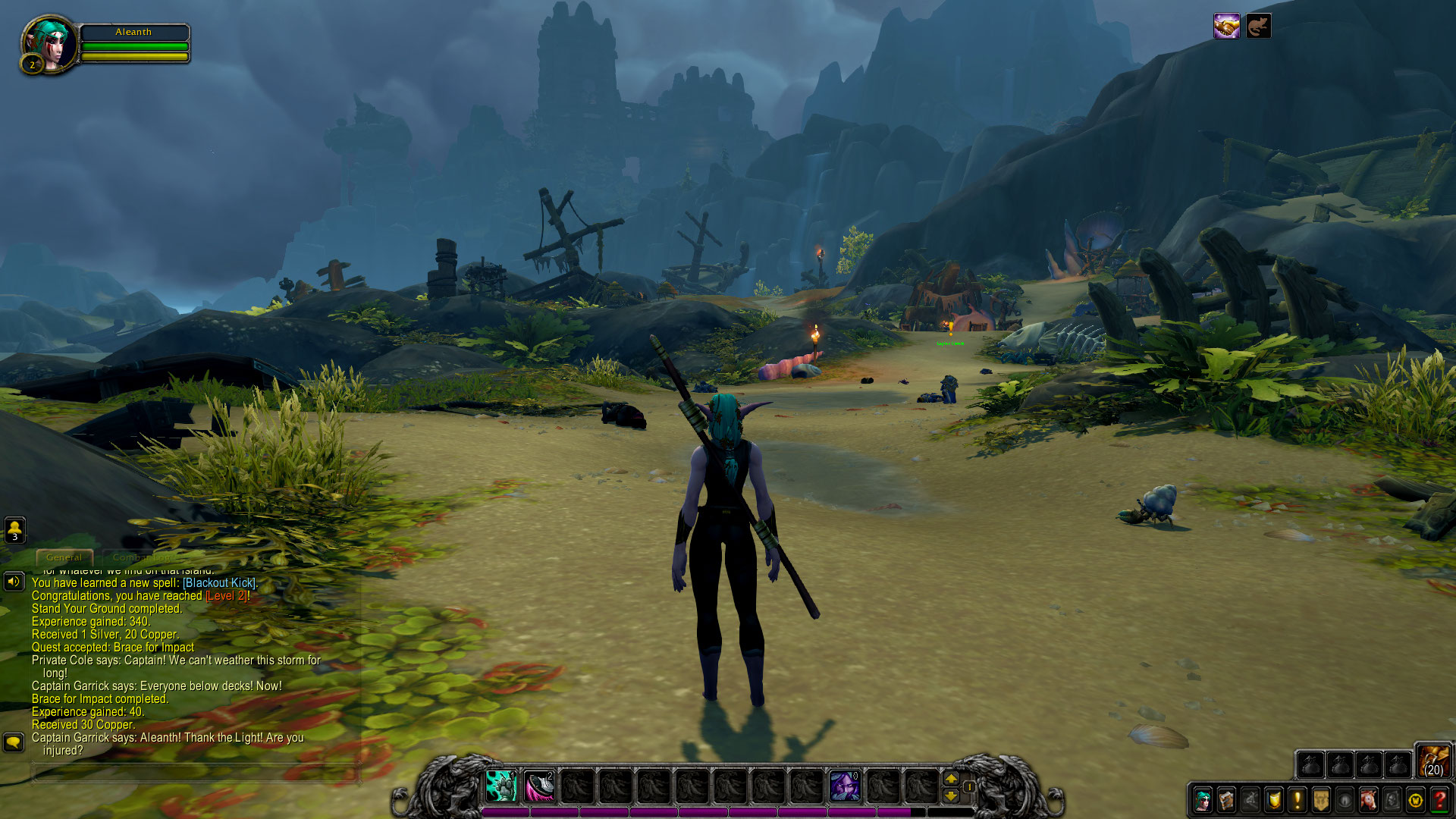 Along with the pre-patch updates on October 13th for the imminent Shadowlands expansion, World of Warcraft has implemented a modernized introductory experience for brand-new players, called Exile’s Reach. This new experience has several goals: teach players how to navigate the UI, familiarize them with the basic abilities of their chosen class, and initiate them into the mechanisms and lore of their newfound home in Azeroth.

Exile’s Reach begins its tale with an expedition to search for a lost crew. You are a new recruit who has volunteered for the mission, but your crew finds itself similarly stranded on an undiscovered island. You must band together with the survivors to rescue as many as you can and discover what plans the island’s nefarious inhabitants have been brewing.

Exile’s Reach is truly intended for the greenest of Warcraft players, beginning with tutorials such as moving with the WASD keys and controlling the camera. You are coached through your first basic ability and what to expect from basic combat with non-player characters (NPCs). The dev team varies the types of guidance among dialogue prompts from characters, button highlights, and large text boxes with glowing arrows.

World of Warcraft operates on several standard quest types, with flavor and mechanic variations in between. Exile’s Reach touches on the most basic of these, to ensure new players understand their requirements when they’re set loose in the “real world”:

You can partner up with a friend from the same faction or run the zone alone. Both players will receive the same loot and experience, but depending on your class, you may find one or two quests deviate from the main questline.

Upon playing through the zone, it’s hard to miss the sense that the developers had to include different versions of almost everything. Not only are there faction-specific characters and dialogue, there are also quests intended for each of the 10 classes available to new players. (Death knights and demon hunters are hero classes that start at level 8 and are only available to players with at least one max-level character.) Several beautifully done in-game cinematics also had to be animated for both faction experiences.

Exile’s Reach is mainly linear, but there is encouragement for the player to explore and discover the island for themselves (another important factor for the spirit of World of Warcraft). In addition to short standalone quests not enforced by the breadcrumb trail, players can also find treasures and rare monsters that drop upgraded gear and other loot. There are also a few quirky little Easter eggs that are worth discovering.

And last but not least, players are introduced to World of Warcraft‘s group-finder system and prompted to join a queue for a dungeon (another common form of gameplay in WoW). This dungeon is structured exactly like others in-game, albeit being a scaled-down version, grouping players together to face two bosses. By the end of the dungeon, players should understand several concepts required to thrive in end-game content:

The entire experience my first time through took about an hour from levels 1 – 10, but this was by two veteran players who deviated little from the main quests. A new player taking more time to look around might spend closer to two hours in Exile’s Reach.

I’ve been playing WoW for eight years now, so I want to be transparent that I am not the target audience of this tutorial. Being familiar with the controls, mechanics, and lore nuances of the game puts me at a disadvantage for a true “first time” experience.

(As a side note, it’s important to be aware that the tutorials do not account for third-party UI addons. My first run-through was with ElvUI enabled, which caused several glitches, including being unable to open my bags and some of the text tutorials refusing to fade after completion.)

Blizzard uses Exile’s Reach to showcase their very best. The care and love put into Exile’s Reach is clear from the beginning, from the gorgeous art design of the zone, to the fun and informative gameplay, to the unique and comedic characters. (My new favorite NPC is Herbert Gloomburst from the Horde questline.) I would recommend that even veteran players give it a whirl, because everything good and pure that I love about World of Warcraft was represented in this tiny Level 1 – 10 experience.

The developers at Blizzard have said that such a tutorial experience has been on their minds for a while, and recent updates to the game’s UI and classes meant a good opportunity for them to realize this idea. They were welcoming of the feedback provided during alpha and beta testing and seem to have implemented changes thoughtfully. From my perspective, Exile’s Reach seems extremely accessible for even the most novice of videogame players, guiding them along while avoiding a patronizing tone.

As always, I found the music and audio quality to be absolutely top notch–that department, along with the voice acting, only improves with every expansion. (Again, Herbert Gloomburst is an excellent example.) The island has different design themes throughout, and the environments are well-integrated and filled with interesting characters.

The developers held nothing back, and truly loaded Exile’s Reach with as much excitement and charm as it could handle. I found it a worthy and engaging experience, even as a veteran player, and highly recommend at least one playthrough to anyone who has purchased World of Warcraft: Shadowlands.