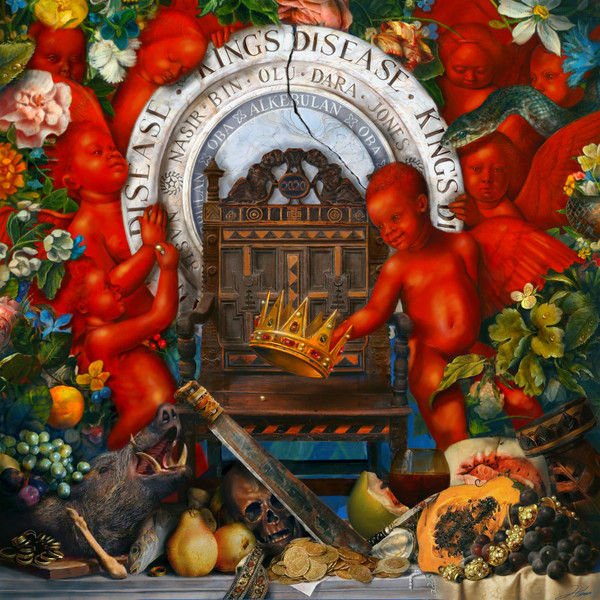 Focused song writing and Hit-boy’s soulful, quality production make King’s Disease one of, if not the best entry in Nas’ recent releases over the years.

Focused song writing and Hit-boy’s soulful, quality production make King’s Disease one of, if not the best entry in Nas’ recent releases over the years.

Legendary New York rapper Nas initially gained traction with the song “Halftime” all the way in 1992, some time after which he released his most critically acclaimed album “Illmatic”. Nas continued to drop some albums that received mostly positive feedbacks after Illmatic but since “Life is Good” in 2012, Nas has struggled with putting out a consistently enjoyable album as both “Nasir” and “The Lost Tapes 2” received lukewarm reactions from both fans and critics alike. But with King’s Disease, it’s safe to say that Nas has finally managed to make a significant artistic comeback. King’s Disease was released on August 21st, 2020.

For the majority of King’s Disease, Nas stays very sharp lyrically with many of his verses covering various topics such as Blackness, History, Romance, Money and so on, all in great detail. Take a look at the intro track for example, Hit-boy’s production is luscious, soulful and creates this almost warm atmosphere and Nas delivers a great verse filled with impressive internal rhymes and a plethora of thoughtful bars. Nas lyrics get historical sometimes, referencing how black people discovered the mathematical study of algebra and much like this particular line, self-love and the importance of Black Culture continue to be a significant theme of the record.

“Jealousy keeps blossoming, ain’t let it box me in

That you got yourself in, claiming nobody helping

The stupidest part of Africa produced Blacks that started algebra

Proof, facts, imagine if you knew that as a child, bruh”

Right after King’s Disease, we get the gritty “Blue Benz” which is essentially a run down memory lane with most of the lyrical content on this song being about Nas’ come up. Though not as topically relevant to the title as the track prior, the introspection and the usual quality production from Hit-boy makes this a solid song regardless.

Car #85 with guest artist, Charlie Wilson, is also pretty good. On this track, Nas raps about using cab service to travel around back in the days and drops a cute line about how he went to a different borough just to meet this one girl despite the danger of doing so since he is an outsider to that neighborhood. Charlie Wilson’s guest vocals also gives the track even more soul. “Ultra Black” and “27 summers” are both self-love, Black-is-beautiful anthems with the latter being more braggadocious and in-your-face; most of Nas’ lyrics reference entrepreneurship and he also gives a shout out to black women and some black-owned businesses.

Black women is the backbone”

“Replace Me” with Don Toliver and Big Sean finds all three artists lamenting about a past love interest. The track’s narrative is not as profound as some of the bigger highlights on the album but the combined effort of Don’s very catchy hook and decent verses from Nas and Big Sean do manage to keep the track afloat. “Till The War Is Won” with Lil Durk is about loving and respecting black women and while the concept of the song is wholesome and genuine, Lil Durk’s performance was just mediocre at best; his lyrics could have delved way deeper into the subject and his flow wasn’t anything special either. Nas and Lil Durk also didn’t connect as well as I would have personally liked them to.

“All Bad” with Anderson Paak also finds Nas reminiscing about a past relationship and Nas, as per usual comes through with great storytelling, great lines and just an overall enjoyable performance but on this track, Anderson Paak’s wonderful vocals are the real selling point. And the next track, “The Definition” is a song where Nas critiques the media’s negative depiction of black people and exposes and ridicules the government; making a reference to when Hilary Clinton called black males “Super-predators”. Nas reunites the firm, a Hip-Hop group consisting of Nas himself, Foxy Brown, AZ and Cormega for the track “Full Circle” and while everyone else came through with quality verses, Foxy Brown’s somewhat off-beat rapping and very flat and generic braggadocio about how other females artists can’t compete with her, did make for an awkward closing verse.

“10 points” and “The Cure” continues the narrative of loving and respecting black people with the latter likely being a correspondence to the album title. Hit-Boy’s production on both of these tracks are brilliant, the horn riffs in the background during the chorus gives the song a triumphant feeling and some real oomph.

King’s Disease is a notable return to form for Nas. Hit-boy’s beats consistently brought the best out of Nas, something the instrumentals on previous albums failed to do. And as a result, we get this tightly structured, wonderfully produced album that is King’s Disease.