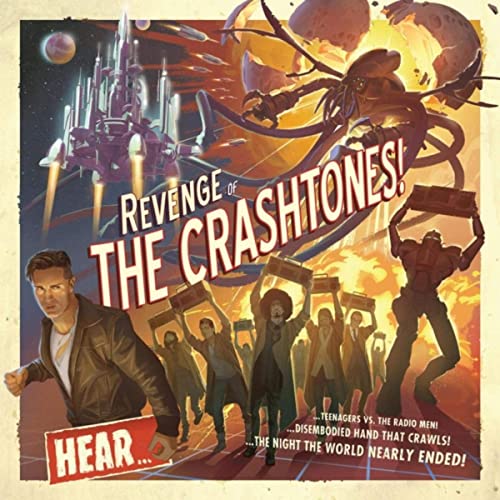 Our review of “The Revenge of the Crashtones.”

Revenge Of The Crashtones is a perfect blend of style and substance. Sam Witwer outdoes himself in his outstanding sophomore record.

Revenge Of The Crashtones is the second album by actor and musician Sam Witwer. It was preceded by Colorful Of The Stereo, a mashup of different styles and genres, with obvious inspiration from bands like Red Hot Chili Peppers. This album continues Witwer’s method of distilling his influences and mixing them into music. This album seems to have taken inspiration from bands like Nine Inch Nails and The Cure. Each song mixes so many different sounds, the final product sounds unique and well made.

“Seven ‘Til Dawn” is a showcase for Witwer’s remarkable range. His emotion of the lyrics, combined with driving bass lines and guitar work, make a dynamic track. He really acts when he sings, which makes it no surprise that he puts a lot of emotion into his delivery.

“It Came from a Man’s World” treads familiar ground from the song “Gentleman Caller” from the previous album. Lyrically, it follows the same theme and structures from the last album. The narrator is a man with little respect for women and uses them for his own desires. This track blends elements of hip hop and blunt vocals to showcase the theme of aggression throughout the song.

The song “Smile” slows the album down and has a more solemn tone to it. The beautifully sad lyrics showcase Witwer’s skill as a songwriter. The song depicts someone who is lamenting on letting someone go but in the end wants them to be happy even if that’s not with him. This track stands out for being considerably slower and less theatrical than the rest of the album.

“And We All Stop” is a track I really could do without. It doesn’t add much else and ironically kind of stops the album before the next big track kicks in. It musically follows the same style as “Smile,” and it could really just be called “Smile, pt. 2.” Thankfully, this track isn’t too long; it just doesn’t do much but interrupt the album.

In this album, Sam Witwer takes all of the things that worked in Colorful of the Stereo and dials them to 11. His fun and energetic melodies are even more fun and filled with twice as much energy. Witwer’s vocals may be the most energetic thing on the album. He also has the perfect range, moving from loud and aggressive to soft and reflective, and both work very well in their respective tracks. This album is highly underrated and not even well known by fans of Witwer’s work. It is well worth a listen and deserves your support.

All songs are written and produced by Sam Witwer. The album Revenge Of The Crashtones is available on physical media and all streaming platforms.