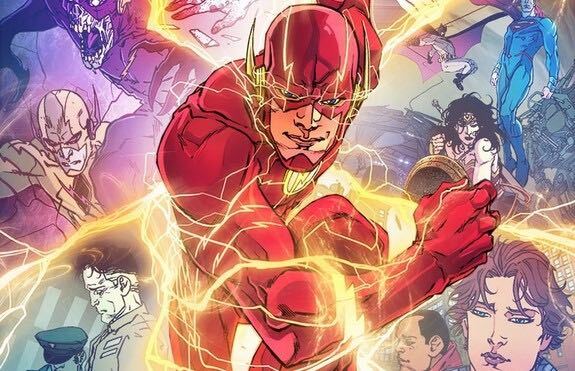 “LIGHTNING STRIKES TWICE” was the first story to be told in The Flash’s REBIRTH and it definitely sets the tone of what you can expect from here on out.

In 2016, Joshua Williamson took over as the writer of The Flash when DC Comics launched REBIRTH. Since then, he has written numerous stories and introduced fans to some pretty awesome characters. Williamson recently announced on Twitter that he’ll be wrapping up his run on The Flash with stories such as Flash Age, Legion of Zoom and Finish Line. With Flash Age finishing up soon and Legion of Zoom right around the corner, I think it’s safe to say that he had a great run writing the character. So with that being said, I think it’s a good time to go over some of his best stories and look at what he brought to The Flash. *Spoilers Ahead*

“LIGHTNING STRIKES TWICE” was the first story to be told in The Flash‘s REBIRTH and it definitely sets the tone of what you can expect from here on out. A mysterious storm shows up in Central City, gifting dozens of innocent people the power of super speed. Barry Allen and his partner August Heart have to figure out how to get everything under control before the evil terrorist group Black Hole figures out a way to weaponize the Speed Force. This story was really cool because it sets the ground work for everything to come. We get introduced to quite a few new characters such as Meena Dhawan, Avery Ho, and of course August Heart a.k.a Godspeed. I think Godspeed was the coolest thing to come out this story. He’s an incredible villain that really tests The Flash’s skills, and he has a really cool suit. One of my favorite panels was when The Flash and Godspeed are fighting and Godspeed is moving so fast, he was actually holding Flash down as he’s beating on him. Overall, this story is definitely a great place to start reading The Flash for anyone that’s interested.

“THE BUTTON” was actually written by both Tom King and Joshua Williamson. King wrote Part 1 and Williamson wrote Parts 2-4. In this story Batman finds a mysterious smiley-faced button on a wall in the Batcave and this is a mystery not even he can solve alone. So who does he call? The Flash. Eobard Thawne makes an appearance in this story as he returns to give Batman the beating of a lifetime for what happened in Flashpoint. Having Thawne and Batman together was a nice surprise that I think everyone enjoyed. Having Bruce meet his dad, Thomas Wayne, as Batman was an awesome moment. I also love how this story sets up DOOMSDAY CLOCK written by Geoff Johns. Writing both Flash and Batman couldn’t have been easy, but Williamson gets the job done nicely.

“THE FLASH: YEAR ONE” was written very well and was complimented by Howard Porter’s art and the colors by HiFi. This is basically Barry’s first year as Flash and we get to see him take on the Turtle. I loved Turtle’s intimidating look in this story. The pacing was good in this because we get to see Barry learn his powers as he goes along and with a little help from his future self; we get to see him start to become the hero he is meant to become. Seeing his relationship develop with Iris was nice to see as well. The final battle between Flash and Turtle was awesome and the build up to it definitely paid off in so many ways. Before I read this Year One story, I never really considered the Turtle to be a threat to Flash but the way Williamson wrote the character made him into that villain he should be.

“FLASH WAR” is by far my absolute favorite story of any Flash series. The tension between Barry Allen and Wally West had been building for awhile leading up to this event. Things get crazy when Renegades from the 25th century show up looking to take Iris West to trial for murdering Eobard Thawne. Barry and Wally have different ideals on what to do and that only adds to the tension between them. Hunter Zoloman showing up was a huge surprise and having him behind everything was a good twist. Barry and Wally eventually fight but it’s more of a race, and it gets crazy. They’re running so fast around the globe that catastrophic events start happening. The aftermath of their race changes everything and it sets up so many other storylines that are just waiting to be shared.

The Flash over the past four years has been amazing. Each story brings something special to not only Flash but also to the characters around him. There are plenty of great stories in The Flash’s REBIRTH but those are the ones I think really defined this run. Finish Line starts in August and I can’t wait to see what Williamson has in store for us.