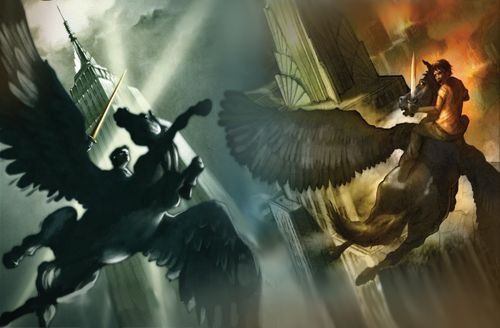 The Percy Jackson and the Olympians series is getting a reboot as a Disney+ series, announced creator Rick Riordan on Twitter Thursday.

The Percy Jackson and the Olympians series is getting a reboot as a Disney+ series, announced creator Rick Riordan on Twitter Thursday.

The Percy Jackson franchise has been brought to screen before, with The Lightning Thief (2010) and The Sea of Monsters (2013) starring Logan Lerman, but the films are drastically different from the books they are based on. After the second film, there was a lot of fan backlash, and The Titan’s Curse, the third installment in the series, was never made. Ever since the failure of Sea of Monsters, fans have asked for the series to be rebooted, perhaps as a show on Disney+. Those prayers have now been answered.

In a brief video on Twitter, Percy Jackson creator Rick Riordan and his wife Becky made the exciting announcement that Percy Jackson and the Olympians would be adapted as a Disney+ series.

Also attached to the tweet was the following statement:

“We can’t say much more at this stage but we are very excited about the idea of a live-action series of the highest quality, following the storyline of the original Percy Jackson five-book series, starting with The Lightning Thief in season one. Rest assured that Becky & I will be involved in person in every aspect of the show.”

While we may not know more about the project, besides that it’s in development, fans have been asking for a faithful adaptation of the series for years. With Riordan overseeing the series in its entirety, we are certainly in for a treat. In the mean time, The Lightning Thief and Sea of Monsters can be streamed on Disney+ now.