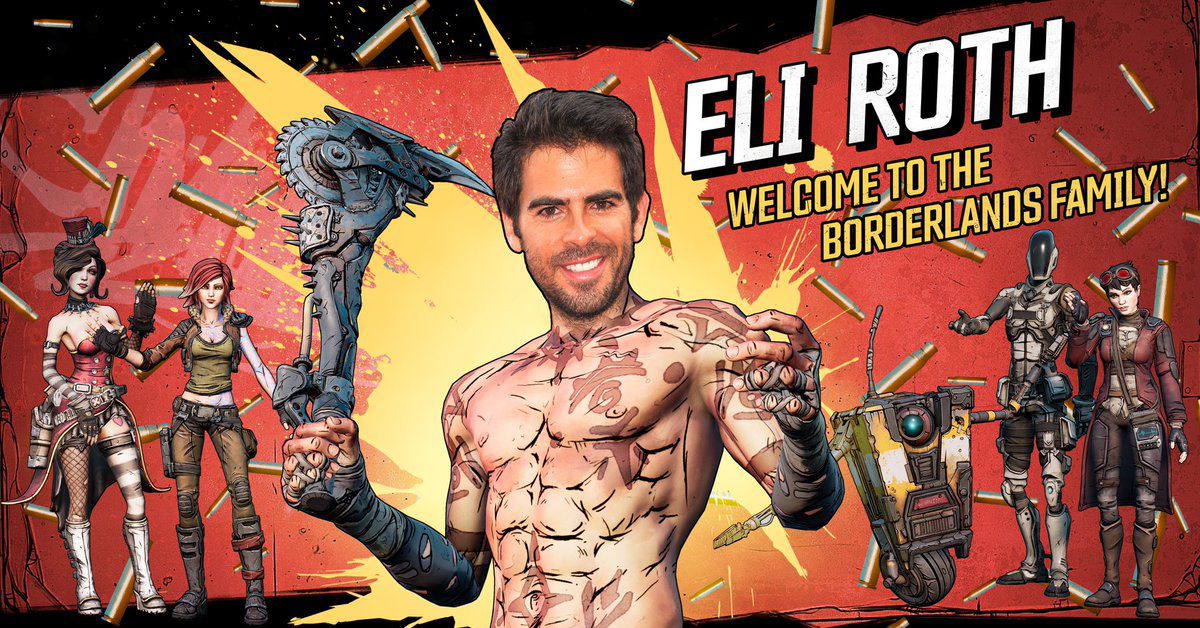 ‘Borderlands’ Movie gets their man. Eli Roth will direct the video game adaptation.

Thats right, Eli Roth will direct a feature reimagining to the video game Borderlands. Set in the distant future on the planet Pandora (no, not that Pandora), the story follows four “vault hunters” as they traverse the planet of Pandora in search of the these mythical vaults that contain riches, wealth, and supposed alien technology. While on the prowl, these vault hunters battle with the wildlife, bandits, and raiders. Ultimately, these vault hunters attempt to stop the head of a private corporation army from getting to the vault before they do.

Roth said, “I’m so excited to dive into the world of Borderlands and I could not be doing it with a better script, producing team, and studio. I have a long, successful history with Lionsgate – I feel like we have grown up together and that everything in my directing career has led to a project of this scale and ambition. I look forward to bringing my own energy, ideas, and vision to the wild, fun, and endlessly creative world of the game. Randy Pitchford and everyone at Gearbox have been incredibly supportive of my ideas – it really feels like a perfect storm of creators coming together.  We are out to make a new classic, one which the fans of the game will love, but also one which will find new audiences globally.”

Lionsgate has a history of disturbing, controversial, yet wildly entertaining successful films from the likes of American Psycho, Hostel, The Hunger Games, and John Wick. Borderlands seems right up their alley. Pairing Eli Roth (Hostel, Cabin Fever) with Emmy Award Winning writer Craig Mazin (Chernobyl) may be the winning combination for the film production studio.

“With Eli’s vision and Craig’s screenplay, we believe we have cracked the code on bringing the anarchic world of Borderlands to the big screen in a big way that will be a fresh, compelling and cinematic event for moviegoers and fans of the game,” said Lionsgate Motion Picture Group President Nathan Kahane.

Movies based off video games haven’t been well received, historically speaking. Some fall flat, as they face high expectations from lifelong fans (Street Fighter). Some become cult classics (Mortal Kombat). With the critic and audience delight of Sonic the Hedgehog recently, maybe the turn of video games on the silver screen is about to turn for the better.

Borderlands the video game has been quite a successful franchise. According to Deadline, Borderlands has sold more than 57 million units around the globe, over 22M units of Borderlands 2. The second installment, released in 2012, still has over 1M players logging on. Borderlands 3, was released last September and has clocked 8M units sold.

Randy Pitchford, executive producer of the Borderlands video game franchise and founder of Gearbox Software, and Strauss Zelnick, chairman and CEO of Take-Two Interactive will be the executive producers for the movie.

“I’m incredibly proud we can bring this beloved video game to theaters for our fans around the world. Eli and Craig, already accomplished and remarkable visionaries, will be amazing stewards of Gearbox’s innovative Borderlands characters and stories,” said Pitchford.

With Roth behind the camera, I can only imagine how intense this ride can be. Mad Max meets Reservoir Dogs comes to mind. A group of “thieves” in a fast paced, dystopian-like future, no holds barred treasure hunt. Although its way too early to speculate anything, I’m ready for it!

Avi Arad and Ari Arad are producing Borderlands through their Arad Productions banner with Erik Feig through his Picturestart. A Lionsgate production penned by Craig Mazin, directed by Eli Roth. At this time, there is no official release date.