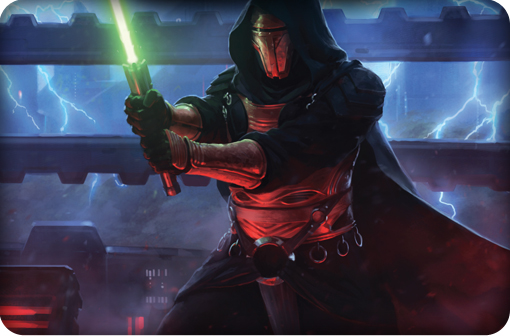 The Rise Of Skywalker was released last week, and it’s visual dictionary soon with it. The visual dictionary provided many easter eggs and insight into the look of the film. One of these easter eggs has a particular meaning. Months ago, The Sith Troopers were revealed to be a new threat in the Rise Of Skywalker, and the visual dictionary distinguishes the legions by naming them after ancient sith lords from Star Wars Legends. The legions were named after Darth Tenebrous, Darth Phobos, Darth Desolous, Darth Tanis, Darth Aneddu, and of course, Darth Revan.

Revan was a character first introduced in the action RPG, Star Wars: Knights Of The Old Republic. Thousands of years before the events of the original trilogy, Revan was once a great Jedi Knight with a powerful connection to the force. At this time, the different Mandalorian clans were united under Mandalore The Ultimate to fight against the Republic in what became known as the Mandalorian Wars. Against the orders of the Jedi Council, Revan, his friend Alak, and many other jedi joined the fight against the Mandalorians. Thanks to Revan The Republic won the mandalorian wars. Afterwards, Revan and Alak journeyed to the unknown regions to find the real threat who was secretly responsible for the Mandalorian Wars. They found the dark lord Vitiate but were turned to the dark side and became Darth Revan and Darth Malak. The two went out in search of a dark side weapons factory called the star forge which they used to wage a new war against the weakened republic. This was called the Jedi Civil War, and with the help of a jedi named Bastila Shan and the betrayal of Darth Malak, the jedi were able to apprehend Revan. Revan suffered amnesia and the jedi filled Revan’s mind with new memories and he became a soldier to the republic. Soon Revan regained his memories, and destroyed the Star Forge and killed his old apprentice. Soon after Revan went back to the unknown regions in search of Vitiate but died in the fight against him.

The visual dictionaries for the new movies often sneak in some fan service for the more devoted of fans. The Rise Of Skywalker is no different, implying the canon existence of many fan favorite sith lords not just Revan. In The Last Jedi’s visual dictionary, the existence of the Jedi Crusaders, the army Revan led into the Mandalorian Wars, was made canon. Now the Star Wars Story Group took it a step further and made Revan himself canon. Fans like myself will no doubt be happy another fan favorite has joined the canon.