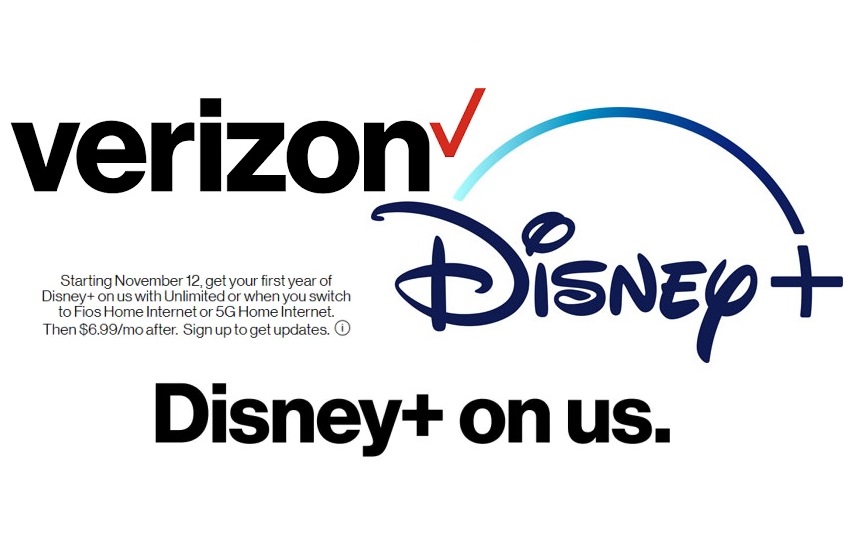 Verizon and The Walt Disney Company have announced a new partnership that will allow a wide range of wireless unlimited customers to enjoy Disney’s upcoming digital streaming service beginning November 12th for a whole year, free of charge.

In a press announcement released earlier today, come November 12th, all existing and new Verizon 4G LTE & 5G unlimited wireless customers will be granted access to a free 12-month trial period of Disney+.  The deal will also be made available to customers participating in Verizon’s 5G Home Internet, as well as their FiOS broadband plans. Once the 12-month deal has ran it’s course, Verizon/Disney+ subscribers can see their balance due return to the normal asking price of Disney+ (which at the time of this write-up stands at $6.99 per month thereafter), if you wish to continue on with Disney’s streaming service.

The Verizon/Disney+ deal will offer “high quality and commercial free viewing,” allowing up to four streams at the same time, downloading of select programs for offline viewing, personalized account settings and recommendations. The Disney+ streaming service will also allow the ability to create up to seven different profiles. Kevin Mayer, current chairman of Disney’s “Direct To Consumer & International” division, spoke on the newly aligned partnership between Version & Disney: “The launch of Disney Plus kicks off a new era of streaming for The Walt Disney Company, bringing nearly a century’s worth of content from our iconic studios to consumers directly,” “We’re excited to share this moment with Verizon and bring Disney Plus to the millions of customers across its award-winning wireless network.”

Has Vestberg, Verizon’s Executive Chief Officer, also offered comment on the newly formed partnership, stating “Giving Verizon customers an unprecedented offer & access to Disney+ on the platform of their choice is yet another example of our commitment to provide the best premium content available through key partnerships on behalf of our customers.” Customers that have already pre-ordered the Disney+ digital streaming service can bundle this both deals together, offering an extension on their already pre-paid subscriptions. Verizon has more information on the newly formed partnership and how to sign up www.verizon.com/disneyplus.

Not sure what will be on the Disney+ digital streaming service? Well, you’re in luck: Disney has recently dropped a (mostly) complete list of ALL the content scheduled to land on Disney+ when the app launches on November 21th. The video can be seen down below, but you may want to schedule your day around it, as the preview/ reveal video runs well over 3 HOURS LONG!!