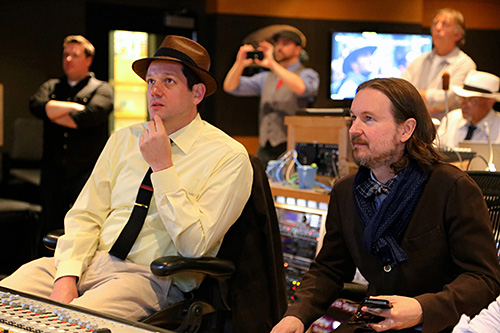 Add Michael Giacchino to the list of those anticipating the start of production on director Matt Reeves’ The Batman. During a recent interview with Philadelphia radio station WMMR, the composer revealed that he’s not only begun preparing for the film’s score—he’s completed its main theme!

“I’ve already written what will be the theme for the movie, because I was so excited about doing it that I just sat down and did it, already,” Giacchino explained in the interview, which can be heard on WMMR’s website. He continued, “And so, Matt [Reeves] has that in his back pocket right now and is using it just to inspire him as he finishes writing and doing the things he has to do to prepare for directing.”

Giacchino’s announcement comes as a bit of a surprise given that film composers do not usually begin work on a movie until the end of production. Typically, a composer is shown a rough cut of a movie, during which he takes specific notes regarding the beginning and ending of music cues, how long a cue should last, etc. These notes are then shared with the director, and the two consult one another on how music can enhance the final product.

The Batman is not the first time that Giacchino and Reeves have worked together, however. As Batman on Film’s Jett Ramey notes, the composer and director have a long relationship, having previously worked together on Cloverfield, Let Me In, Dawn of the Planet of the Apes, and War for the Planet of the Apes. This association likely gives Giacchino insight into what Reeves is looking for even before cameras begin rolling. The news also suggests that Giacchino will set expectations for what The Batman’s music should sound like rather than the other way around, giving the composer greater freedom over the score.

Director Matt Reeves’ The Batman stars Robert Pattison and Zoë Kravitz and is expected to be released on June 25, 2021.

Hat tip to Batman on Film.