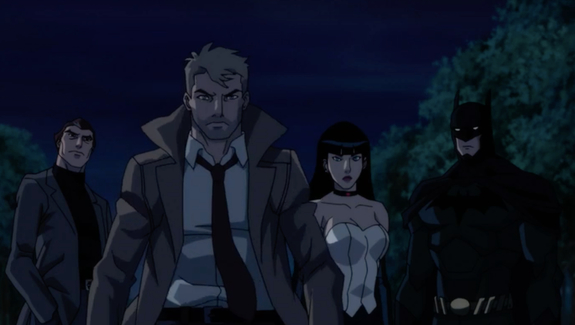 Justice League Dark is directed by veteran of DC animation, Jay Oliva, and stars Matt Ryan as Constantine, Jason O’Mara as Batman, and Camilla Luddington as Zatanna. The film was released in 2017 as part of DC’s ongoing shared universe of animated movies. The plot revolves around people having strange hallucinations of demons and monsters, causing them to commit heinous atrocities. Batman then seeks out Zatanna to help him find John Constantine and join forces with other monsters to find out who’s behind these hallucinations and stop them.

I feel lukewarm on this movie, there’s a lot to love, but also a lot that bothers me. Let’s start with what I did like, John Constantine is the best character in the film and that is primarily due to the energy Matt Ryan infuses in this role. There is a reason Matt Ryan OWNS the role of Constantine and it’s because of how well he understands the character and just how much he has with the role. The action is very well done, each characters’ strengths and weaknesses are utilized to add more tension to the fight scenes. The music is extremely atmospheric, using less traditional orchestra instruments to make it unique.

While there is a lot of good to be had in this movie, there’s a ton of ‘meh’ and a lot of ‘wait what!’ to be had too. Unfortunately not all the characterization is as good a Constantine’s, Jason Blood is a character I feel isn’t given a good treatment. He’s portrayed as more fearful and resentful of Etrigan and doesn’t really have a worthy arc in my opinion. I have the same complaint about Swamp Thing, except he doesn’t even get an arc. He shows up twice in the movie and is then quickly dismissed and it’s such a let down for fans of the character. The villain of this movie, Destiny, is actually a poor excuse for an antagonist. He is completely forgettable and doesn’t really have a threatening presence or ANY motivation. The lackluster writing for Destiny really diminishes the tension of the film and makes the reason for these heroes uniting feel hollow. Now it’s time for the elephant in the room, Batman’s inclusion. I say this as a massive fan of the character, Batman’s presence drags the film down, He feels so out of place and he doesn’t do or say anything important or contribute to the team in any meaningful or memorable way. His inclusion was so obviously just a way to sell more copies and all he does is grunt and make one liners.

This film delivers on entertaining action and serves as a fun story which shows off a ton of cool characters. The forgettable villain and lackluster writing for some of the characters greatly hurts the film. Given all that, I’d say it’s a film worth seeing if you can find it for cheap.