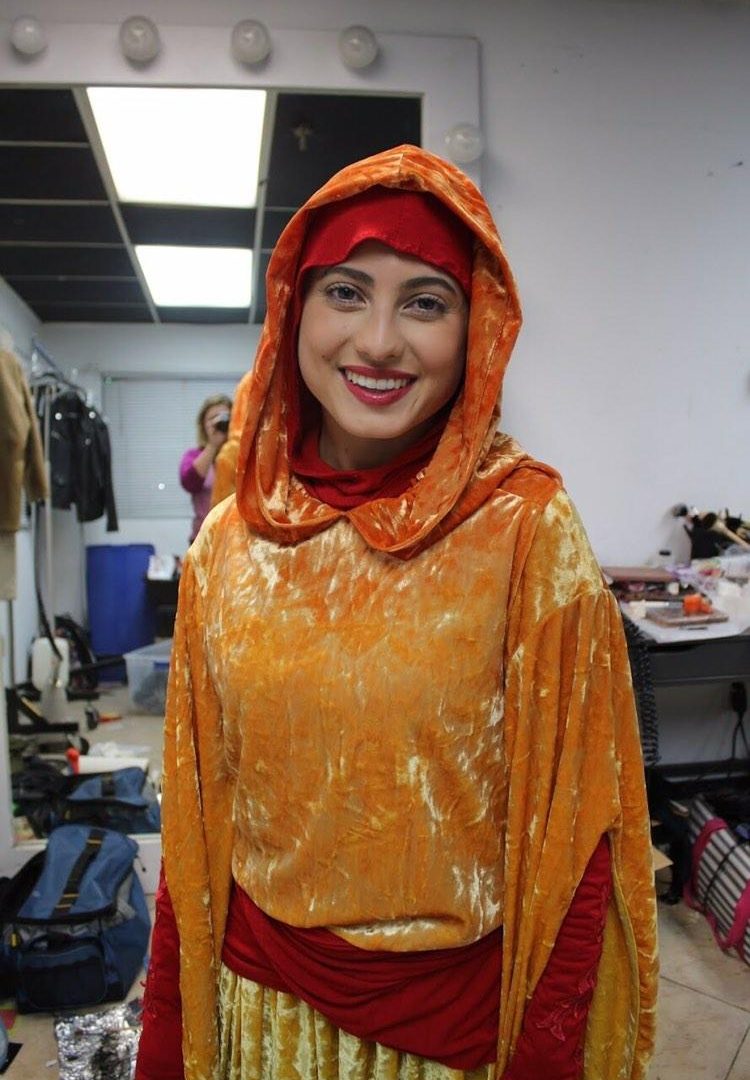 Catherine LaSalle starred in 2018’s Vader, Episode 1: Shards of the Past as Padmé Amidala.

Catherine LaSalle starred in 2018’s Vader, Episode 1: Shards of the Past as Padmé Amidala. The fan film was created by YouTuber Star Wars Theory and directed by Danny Ramirez. Upon release, it received praise from both fans and critics alike who recognized its unique direction. I recently had the chance to interview the actress about her role in the film, her opinion on upcoming Star Wars releases, and what we have to look forward from her in the future.

Hi Catherine, how are you?

Hello There! I am fabulous, thank you! Looking forward to answering these questions!

Great! What drove you to want to play our favorite Naboo Queen – Padmé Amidala in YouTuber Star Wars Theory’s fan film – Vader, Episode 1: Shards of the Past?

To be completely honest, I was originally very hesitant to send in an audition tape, I almost didn’t even send one in at all. I had been watching some of Star Wars Theory’s videos (my boyfriend had gotten me into them), and it was my boyfriend who’d mentioned that SWT was getting ready to make a Vader fan film. After he’d posted the official casting call on his channel, I knew that I wanted to do it deep down, but honestly thought that I didn’t even stand a chance. Like I said, I almost didn’t even send in an audition! The deadline was approaching and we were on vacation and I had one hour alone in our hotel room. I thought, “If I’m going to do this, this is the one hour I have to film something and get it out there.” I figured I had nothing to lose, even if it didn’t work out. Deep down, though, I really wanted it, and I almost had to control my excitement by preparing myself for disappointment, convincing myself that it probably wasn’t going to happen. But I’m certainly glad that I decided to mail in an audition!

Do you personally relate to Padmé in any way?

Oh, that’s a really good question! I don’t know if anyone’s asked me that one before. What stands out about her most to me is how much she genuinely cares about other people, and wants the best for everyone. You can see it in her politics, she always wants to do what’s right and will fight for what she believes in, and I would say I try to do the same in my own life. I also have a major crush on Anakin, so I definitely relate to her taste in men, LOL.

What was your favorite moment in Vader?

Oh there are so many. I’ve got to say, I am OBSESSED with the scene where Vader (without the suit) opens his eyes after awakening from his vision/dream. That is so intense to me. It gives me chills every time I watch it, and I’ve watched it a lot. I just appreciate that whole scene showing Vader powerless without his suit, it really humanizes him. I witnessed firsthand how hard the fabulous makeup team worked to apply his prosthetics and replicate the burns, and they clearly did a fabulous job. It looks so amazing on screen.

What was the most challenging aspect of your role?

I would say the hardest part for me was accepting the fact that I was playing a character that had already been done before. Everyone already knew and loved Natalie Portman’s rendition, and I was about to step into the shoes of this already beloved character. Natalie Portman is Padmé, and I really worked to accept this. I also recognized the fact that many viewers were probably just going to immediately dismiss me as the “new” Padmé, regardless of how my performance actually turned out, just because I was someone new and not her. So in a way, I would say it was difficult in terms of trying to emulate another person’s performance of a character, as opposed to having the opportunity to make it my own. Throughout filming, and leading up to filming, I constantly had this pressure on myself to do Natalie Portman justice in my own rendition of the role, especially because I am such a huge fan of hers. I grew up loving Padmé.

What was your favorite moment for your character in Vader?

I LOVE when Darth Padmé comes on screen! I remember reading the script and freaking out, wishing I could just tell someone about how cool that part was (of course I had to keep it confidential). I just really wanted to geek out about that one! I was so excited to turn into Sidious. I also tend to lean towards Team Dark Side, so I was so excited to become a Sith for a hot minute.

Oh, even I don’t know the answer to that one! I wish I could say. Right now I really just go wherever the wind takes me with the channel.  I still feel like I haven’t pinpointed my niche yet in terms of content, I kind of just pump out whatever ideas come to mind. It’s all very miscellaneous, but I’m a firm believer in not trying to force content or operate around any strict “theme”. I’m sure there will be plenty of review/reaction videos coming up with “The Mandalorian”, the return of “Star Wars: The Clone Wars”, and “The Rise of Skywalker”. There is a lot of good Star Wars stuff approaching. But I might want to branch out from Star Wars too, who knows. I DO know that I definitely want to pump out some more artistic videos, maybe more drawing time lapses or more (probably failed) attempts at some Star Wars makeup.

Any hidden talents your fans aren’t aware of?

Some people know this one, but I’m currently finishing up school to get a BFA in Painting and Drawing, so I love Fine Art! I also used to sing a TON throughout high school, and still do sometimes when I’m home alone with nobody there to hear me.

Out of all the upcoming Disney+ Star Wars content, which are you most excited for?

I’m really looking forward to the return of the Clone Wars! I can’t wait for it to come back! Darth Maul is my favorite! I’m also super excited to be able to finally watch Rebels on an easy-to-access platform.

It’s been almost a year since the fan film. How has it impacted your life since then?

Oh man, that’s a good one. I’ve got to say, the most important impact to me has been the people it’s allowed me to meet/work with. Everyone, and I truly mean everyone involved with Vader is such a genuinely kind and dedicated person. I felt so privileged to be able to work with such an amazing and welcoming group of people. We really clicked instantly, and I’m so grateful for the friendships I’ve made through this experience. And it has also reinvigorated my love for Star Wars! I’ve gotten to connect with so many more people and just nerd out, and I’ve honestly come to embrace my nerdiness. Star Wars fans are some of the best people, and I’ve definitely been able to connect with more of them since the fan film.

Do you plan on expanding your acting career outside of the Vader franchise?

Yes! I would love to! I first got into acting when I was 8 years old, and continued to do it all throughout middle school and high school. It’s honestly my biggest passion (besides art, of course), and I would absolutely love to do more of it in the future.

See Catherine as Padmé in Vader, Episode 1: Shards of the Past below: