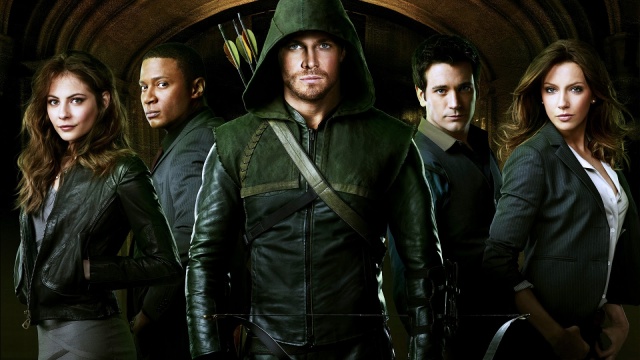 With the 8th, and final, season of Arrow just around the corner, its time to look back on the entire series starting with Season 1.

Season 8 of Arrow is drawing near, and it is confirmed to be the shows last season. So I thought it would be fun to take a look back on the series. I will be reviewing every season of Arrow, including 8 when all of it is released. Arrow season 1 first aired October 10, 2012 and ended May 15, 2013. The season stars Stephen Amell, David Ramsey, Emily Bett Rickards, Katie Cassidy, and John Barrowman.

The overall plot for this first season is actually really good for the most part, as the season does an amazing job establishing everyone’s arcs and motivations. It’s simple premise of literally checking names off a list may sound like it could get boring very quickly, but the writers add enough variation and stakes to each person Oliver goes after to keep it fresh. Eventually the list does fade into the background as Oliver goes after super villains from the comics, like Firefly, Deadshot, and the Royal Flush Gang, and especially once the undertaking becomes a pivotal part. The flash backs are very effective in showing how Oliver became the man he is in the present, and it’s own story and characters I actually found slightly more engaging. Slade Wilson(Manu Bennett) and Oliver have such great chemistry, and this subplot does a great job playing with the unclear loyalties of Yao Fei(Byron Mann). Fires was kind of a generic villain but he does his job, and the flashbacks aren’t about him anyway. The writing at times can be cringey, like some of the romantic dialogue, and the way certain characters are(We’ll get into that later). There’s quite a few small moments that make you go “ what, how?!” but nothing super important and you might not even notice.

The season does a mostly good job with characters. All of the main characters have their own stakes and motivations in the story. Of course Oliver, but also Diggle wanting revenge on Deadshot for killing his brother. Felicity wants to find Walter Steele(Colin Salmon) after he’s kidnapped. This extends to the rest of the cast, Tommy wants to become responsible for Laurel, and Detective Lance wants to find the hood because the law is the last stable thing in thing in his life. Laurel is mostly kind of confused and doesn’t really know what she wants which makes her hard to root for, she’s one of the weakest parts of the season.

The villains are very hit or miss for me, the Dark Archer is a great main antagonist, his presence is intimidating, and John Barrowman gave a captivating performance. A common joke is that Arrow really wants to be a Batman show, that’s very accurate and the villains suffer from this. Most of the villains are either Batman villains or reworked to be like Batman villains. The Huntress in this show is just Catwoman lite, someone the main character has feelings for but at the end of the day is a criminal. She also has a terrible and contrived reason for going rogue, get this she hates Oliver because he didn’t tell her about his ex girlfriend Laurel, that was just a dumb excuse to pit her against Oliver and I cringed so hard when it happened. I might not have minded this as much if the performance was any good. Jessica De Gouw is not very good, she plays huntress more whiny then she should be, this character should be determined and unwavering but she just whines about Oliver not killing her father with her, and every time she’s on screen I just find it hard to keep watching. And now the second worst villain in this show(We’ll get to the first in a later review). The Count is just a very watered down Joker, his only personality is just haha look at me I’m crazy. He is so unrecognizable from his comic counterpart I wonder why they even bothered adapting him. The writers just wanted the joker with none of the substance or menace. He isn’t even a threat, he presents no real challenge to Oliver, he sells Thea drugs but that’s really it. The only challenging part about his character is finding him, so every time he shows up, Team Arrow basically just plays Where’s Waldo for 45 minutes.

Most of the action sequences were done really well, with shots being being long, and enough good editing to ensure you knew what was going on. I was impressed with the choreography and how Oliver’s resourcefulness was utilized in a lot of the action. However there is a fair bit of action in the show that is actually disappointing. Mostly because all that action is filmed in extreme close up and has quick cutting(AKA the worst way to edit fight scenes). However, that kind of action only happens a few times so it isn’t a huge problem.

Most of the drama actually didn’t bother me, mostly because a lot of that dramatic subplots are direct consequences of the main plot. For example, Thea(Willa Holland) and Moira(Susana Thompson) are both frustrated with Oliver, because his double life causes him to leave them all the time. Thea thinks Moira is cheating on Walter(Colin Salmon) with Malcolm Merlyn, this is because she’s with him a lot to discuss the undertaking. However all the romantic drama is awful and drags the show down, it is a CW show so that’s to be expected. I didn’t really care about Oliver and Laurel because I never really saw when their relationship worked so I don’t really care if they do or don’t end up together. Tommy and Laurel worked great cause their relationship was integral to his character arc, but the writers wanted Laurel and Oliver together instead(but only really for this season).

This is a great start for the show, it establishes an interesting and compelling cast of characters, as well as a great plot that challenges them. However, the treatment of some characters drag the season down a little bit. The action for the most part is entertaining and well done, say for a few instances. This season is definitely worthy of a watch even if it is trying really hard to be like Nolan’s Batman.