Along with the teaser trailer that we received a few months back which featured a Spartan making his way through the desert wearing a torn up poncho until finally encountering what looks to be a Promethean out of Halo 4. We have also received a blog post from franchise development director Frank O’Connor reveals the art, along with some hints about what the future has in store for us. 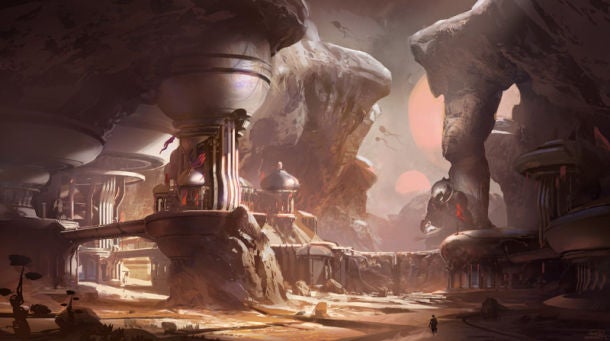 Many fans noted that I was very deliberate with my phrasing on stage at E3 last year. I spoke about a ‘journey,’ rather than a destination – and that journey definitely begins in 2014 with a giant leap, rather than one small step. We’ll give you much more information about our plans for this year at the Xbox E3 2014 Media Briefing on June 9, and we’re confident that Halo fans will be pretty excited [about] the special plans we have in store.

Halo 5: Guardians” is a bigger effort than “Halo 4.”  That applies to the content and scope of the game, as well as the technology in what’s now a brand new and more powerful engine.  Certainly there are some core elements carried over from prior games, but we’ve invested a huge effort in retooling our tech to take full advantage of the Xbox One’s hardware and ecosystem to create worlds and experiences worthy of next-gen.

While 343 Industries is making some giant strides of their own for this already epic series, they will not be the only game on the market running with 60FPS and dedicated servers. The company still has a long way to go to compete with Bungie. Fans felt that Halo 4 fell short on their beloved series. We’ll see if Halo 5: Guardians can breathe new life into our Spartans as we set out on another journey into the stunning universe that gamers have come to know and love.