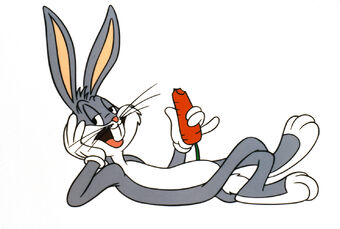 Cartoons have been coming out for children for generations and with that comes a solid appreciation from adults as they can reminisce about their childhoods.

Amongst the cartoons are some elite characters that have had effects on the cartoon world for years. Some of those more iconic characters include SpongeBob, Tom and Jerry, Timmy Turner, and Phineas and Ferb.

But I believe that the most elite of all cartoon characters has to be of Mel Blanc’s Bugs Bunny.

Looney Tunes has been coming out since 1930 and has always been huge in the cartoon community. Between 1942 and 1964, “Looney Tunes led the popularity parade in animation shorts” according to AnimationUSA.com.

With the emergence of Looney Tunes came the timeless characters and international recognition of the show’s biggest character Bugs Bunny.

Bugs Bunny has been in some of the most famous animated shorts of all time, including the “Hunting Season” trilogy and the “What’s Opera, Doc?” which are some of the finest shorts through cartoon history.

“Bugs is an American icon, at once exceptional but ever the underdog”

via Kwame Opam of The Verge

The character of Bugs Bunny is such a recognized character who always has the quippiest, most sarcastic lines with subtle touches of humor.

Bugs always triumphs through the challenge of any foe that he stumbles upon, including in terms of who is the greatest cartoon character in cinematic history.

But Josh, didn’t you also mention that he is the most powerful cartoon character?

Bugs Bunny may be dominant in terms of recognition but lets take a deep dive into his abilities and sheer power.

Despite his main lady Lola Bunny, Bugs Bunny has had his fair share of love interests. He has been romantically involved with a handful of characters

The following are characters that he has had relationships with throughout his 82 years of pursuing love: Honey Bunny (first appeared in Bugs Bunny Comic Book #108), Lula Bunny(featured in Looney Tunes & Merrie Melodies comics between 1947-1955) and even Pepé Le Pew’s love interest Penelope Pussycat (in the 1995 short “Carrotblanca”).

Since the debut of Space Jam, Bug’s main squeeze has been Lola Bunny, who’s has been the sweetheart of Bugs since.

Bug’s powers of seduction have even taken precedence over his foes, where Elmer Fudd himself proposes to Bugs in the episode “Bugs’ Bonnet,” an episode where characters take the characteristics of whatever hat they wear.

Bugs Bunny has an amazing sense of manipulation throughout the series where he can bend characters’ thoughts and actions to his will.

The most prominent example is in the famous “Rabbit Fire” episode (apart of the Hunting Season trilogy), where he tricks his friend/foe Daffy Duck, that he is the one being hunted up to three times. He is seen manipulating Daffy with a silver tongue and sleight of hand as he purposefully selects what lines to deliver and when, while switching the signs to also confuse Elmer Fudd, to leave Daffy dumbfounded and on the short end of the metaphorical stick.

He is also seen convincing Elmer Fudd that Daffy is a pigeon and a skunk which he is clearly not.

Bugs Bunny is seen tricking and out-smarting almost all of his foes in some way or another, where his manipulation skills extend throughout the Looney Tunes tenure.

Bugs Bunny is obviously seen being smashed by boulders and monsters but he always seems to come back. Sure, this can be said for a lot of characters that suffer fatal scenarios and appear healthy in the next scene.

However, Bugs has taken it even further. Bugs has even overcome death from starvation. He is clearly a indestructible character that can overcome the likes that some characters haven’t even approached yet.

Most cartoons character have a sense of breaking the fourth wall and addressing audiences or aspects of the very film they are in, but Bugs’s abilities are different.

He is seen not only breaking the fourth wall but reconstructing the universe in which Daffy Duck resides. He draws and remakes the world around Daffy, just to toy with him in the episode “Duck Amuck.”

The animator that is changing the background and appearance of Daffy is revealed to be Bugs, but this is a power that no other character has had the ability to do across filmography.

In the episode Transylvania 6-5000, Bugs is seen using magic to change the form of the pesky vampire that he encounters using the phrases “hocus pocus” and “abracadabra.” He uses these in an unknowing tactic to change the vampire back and fourth between human and bat form to inflict pain and defend himself using the castles moat and flooring. He eventually uses the spells to give himself wings and fly away.

In the film Space Jam, Bugs Bunny is seen traveling through the real world and the Looney Tunes World, creating a sense that he can willingly travel through dimensions or worlds. He does this with ease to gain Michael Jordan’s shoes so that he can help the Looney Tunes characters defeat the MonStars.

Bugs Bunny also has an extreme sound manipulation as seen above screaming and breaking ice. This is an extremely impressive feat that shows a Banshee-esque ability.

Bugs Bunny has the skill of weapon mastery. He shows this with exceptional fencing skills in the episode “Case of the Missing Hare,” and has also shown incredible marksmanship with guns as he can make incredible shots while ricocheting the bullet in the episode “Bugs Bunny Rides Again.”

Bugs Bunny is seen here with the ability of resistance to extreme darkness in Legion of Superheroes Bugs Bunny #1.

Bugs also shows the ability to create illusions within mirrors as he tricks this witch to believe she is beautiful. This comes from one of the older comics but I’m not sure which one.

So there are so many other moments and abilities that Bugs Bunny shows his power but I feel as if I’m mentally drained from all of this research. Shoutout to Fandom for providing me with all of the sources that I needed.

I believe that Bugs Bunny is the most powerful character in all of cartoons and shows from his vast array of abilities seen throughout the TV show, his comics, and his film appearances.