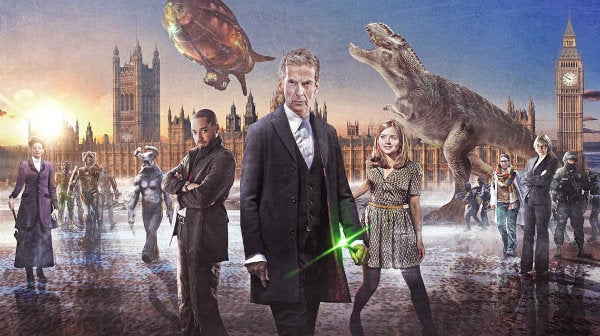 Greetings Whovians! Once again we find ourselves in the time of the year where we must take a hiatus from new weekly episodes. The 8th series has concluded, so beware of spoilers ahead.

The season opened with an ambitious 90-minute episode, introducing us to the newest incarnation of the Doctor, played by Peter Capaldi. The opener packed a punch, fitting in a complex plot, great one-liners, and the return of favorite characters. The episode left me with a high expectation for the rest of the season, which were met only halfway.

This is the first Doctor Who season I didn’t sit down and watch straight through right away. Episode 2 was interesting enough; who doesn’t love a bit of Dalek action paired with some philosophy? However, my enthusiasm slowed on episodes 3-6. More than one of these episodes tries to introduce a new alien that feels like a re-working of old enemies. In the Robot of Sherwood, we have metal men who can blast humans to smithereens with an electrical charge. Time Heist introduces a terrifying enforcer who destroys your brain; by the end of the episode, we find out all he wanted was to rescue his soul mate; very reminiscent of “Hide” in Season 7.
There were episodes in the season where you can truly see Moffat’s handiwork, although at times it feels forced. Episode 4 had all the elements of a Moffat episode; an unknowable creature that hides when you try to see it, followed by a twist at the end that attempted to connect to an earlier episode.

The season’s writing didn’t start to pick up until episode 7, “Mummy on the Orient Express.” The story was equal parts suspenseful and heartfelt, without throwing it in your face. I enjoy a good monster, but the best are the ones that terrify me without trying too hard. The season finale, as well as the Christmas special, absolutely redeemed the season for me. We were given a dramatic two-parter that opened with the death of a main character. Season 8 spent a great deal of time developing the character Danny Pink, Clara’s new love interest. While the romance was tedious at times, Danny’s character was treated with a double dose of harshness towards the end. We learn the identify of Missy (who I hope we’ll be seeing again), and find out she’s been collecting souls to turn them into Cybermen. Danny–in Cyberman form–ends up saving the day by sacrificing himself. This made me finally realize where they had been going with him, which seems a bit of a waste for a character who was such a great foil to The Doctor.

The Christmas special managed to combine elements of the Alien series and the movie Inception, while featuring the great Nick Frost himself as Santa Claus. This episode was by far my favorite of the season written by Moffatt.

My big issue with the season overall is that the 50th anniversary and last year’s Christmas special set up the show for a dynamic change. No longer would the Doctor’s main purpose be to save the universe from random mishaps; his goal was to now seek out his homeland, Gallifrey, and find it in the pocket universe it had been sent to. The minds behind our favorite sci-fi series hailed the 50th anniversary as a direction-changer for the show; yet, Gallifrey isn’t mentioned until the very last episode. While I love the current overall formula of Doctor Who, I’m intrigued by the idea of the Doctor having an intrinsic mission. Maybe next season?
What did you think? Leave your comments below!